US seeking to resurrect Daesh in Iraq 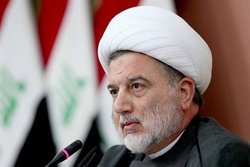 Leader of a major political party in Iraq has said that there has been clear intelligence evidence suggesting that the United States is trying to resurrect Daesh-led militancy in the Arab country after the Takfiri terrorist group was defeated in neighboring Syria.

RNA - Humam al-Hamoudi, who chairs the Islamic Supreme Council of Iraq, said on Saturday that Washington’s main strategy in Iraq has been to make the Arab country dependent on American military presence by keeping militancy alive in parts of the Iraqi territory.

Speaking to the Iranian television, Hamoudi said many Daesh militants fled to Syria after being defeated in Iraq over the past years. However, he said, the militants are mulling a comeback to Iraq with the help of the US after they lost most of their positions in Syria.

“After our victory against Daesh and the purge of militants into Syria, some relatively accurate intelligence were received from there that the US was trying to dispatch Daesh to Iraq through the joint borders so that Iraq would continue to face a problem called Daesh and seeks help from the US and others,” said Hamoudi.

Elsewhere in his remarks, Hamoudi touched upon Iran’s role in Iraq and Washington’s efforts to drive a wedge between the two neighboring countries.

The Iraqi politician said there were huge commonalities between Iran and Iraq, especially in terms of religion, adding that bonds between the two nations even deepened in recent years after Tehran offered massive help to Baghdad in its fights against terror.

He said his party and many others in Iraq were opposed to US sanctions against Iran and will do their best to undermine them.

“We honor our religious and cultural bonds with Iran,” said Hamoudi, adding, “we will not team up with Iran’s enemies in issues like sanctions but we will try to make this plot a failure.”