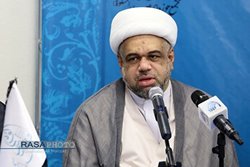 RNA – In an exclusive interview with Rasa News Agency, Hujjat al-Islam Abdullah al-Daqqaq, ‎a prominent Bahraini cleric in the Islamic Seminaries of Qom, referred to the “Deal of the ‎Century,” the President of the United States Donald Trump’s so-called plan for peace ‎between Israel and Palestine and said, “This deal was imposed on the Arabs and Muslims by ‎the United States and the Zionist regime and their intention is to occupy and usurp Palestinian ‎lands. Accepting such a deal is never acceptable and the conflict between Palestine and the ‎Zionist regime will continue until the liberation of all the occupied Palestinian lands.” ‎

The director of the Bahraini seminary in Qom added, “If the Arab governments had a plan, it ‎would be possible to unite and face the Deal of the Century, but it must be said that ‎Palestine will be liberated only through resistance.”‎

He referred to Iran’s proposal to resolve the Palestinian issue and said, “The plan of the ‎Islamic Republic of Iran is very appropriate but it will be very difficult to implement it as long ‎as the international community wants something else.”‎

Hujjat al-Islam al-Daqqaq said, “The Deal of the Century means that the Palestinians willingly ‎give their lands to the usurping Zionist regime and make the Palestinians in need of this ‎regime and a prelude to removing Palestine from the map of the region completely and ‎achieving a region where a Palestinian state can’t be formed.”‎

His Eminence said, “The Deal of the Century is a prelude to reaching out to other countries, ‎such as Jordan and Lebanon, and agreeing to this deal is a great betrayal by the officials of ‎the Arab countries.”‎

He said, “The dead Deal of the Century was born and won’t bring any achievement and its ‎only plan is to bring votes for Trump and to gain the Zionists’ support in the November ‎presidential election.”‎

Hujjat al-Islam al-Daqqaq added, “Imam Khamenei is the leader of the Islamic Resistance ‎Front in the region and Hujjat al-Islam Sayyid Hasan Nasrallah is in southern Lebanon and ‎the position of resistance will prevent the sale of Palestine and the conclusion of the Deal of ‎the Century. Palestine will be liberated only by relying on God and resistance.”‎

The opening ceremony of the new site of Vasael.ir held