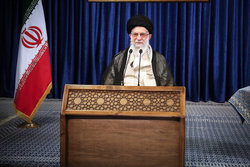 On the anniversary of the martyrdom of Ayatollah Dr. Sayyed Mohammad Beheshti ‎and his companions, the National Conference of the Judiciary was held with the attendance of Imam ‎Khamenei via videoconference this morning, June 27, 2020.‎

RNA – On the anniversary of the martyrdom of Ayatollah Dr. Sayyed Mohammad Beheshti ‎and his companions, the National Conference of the Judiciary was held with the attendance of Imam ‎Khamenei via videoconference this morning, June 27, 2020.‎

The following is the excerpt of the statements Imam Khamenei made at this conference:‎

‎“The recent actions of the judiciary in ‘reviving public rights’ are truly pleasing. Prosecutors ‎must try their best to defend the rights of the people. These rights include prosecuting those ‎who harm the environment and confronting the unnecessary shutdown of manufacturing ‎firms.”‎

‎“People’s easy access to the judiciary, efforts to improve people’s judicial awareness, ‎constant and direct contact with the people and benefiting from assistance and information ‎from the public in issues such as fighting corruption are examples of the judiciary’s being ‎people-oriented.”‎

‎“The American President talks about ten years of imprisonment for those who bring down ‎symbols of slavery and racism, and the United States government separates the children of ‎immigrants from their parents. But most American mainstream media and movies depict US ‎courts as being centers of absolute justice.”‎

‎“The movement to fight corruption, which may be witnessed now in the judiciary during ‎Hujjat al-Islam Ebrahim Raeisi’s term, began during the time of Mr. Amoli-Larijani. He had ‎started this effort from both within and outside of the judiciary.”‎