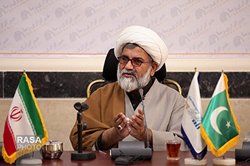 While praising the great position of Imam Khomeyni, Allamah Ja’fari said, “There was ‎no place for the word ‘failure’ in the encyclopedia of the Imam’s words, and in any case, ‎he guided society in the right direction by relying on God Almighty.”‎

RNA – Allamah Raja Nasir Abbas Ja’fari, the head of Pakistan’s Majlis Wahdat-e-‎Muslimeen, said, “The thought of Imam Khomeyni and his personality were a strong ‎barrier to the expansion of the tyrannical powers and the will of the arrogant powers in ‎the world.”‎

The Pakistani scholar added, “Imam Khomeyni’s many years of revolutionary struggle ‎caused the countries of the world to become acquainted with the truth of Islam and ‎look at it with respect.”‎

He added, “The main reason for the success that Imam Khomeyni has always had is that ‎his speech and behaviour didn’t differ from each other.”‎

Allamah Ja’fari added, “There was no place for the word ‘failure’ in the encyclopedia of ‎the Imam’s words, and in any case, he guided society in the right direction by relying ‎on God Almighty.”‎

His Eminence said, “Muslims in the world are not in a good position now because ‎instead of paying attention to the one God, they have become captives of the earthly ‎gods.”‎

He emphasized, “To solve the current crisis that has cast a shadow over Islamic ‎countries, Imam Khomeyni’s thoughts and character must be implemented once again in ‎Islamic societies.”‎

Allamah Ja’fari said, “The tyrannical powers, especially the Zionists, are still afraid to ‎hear the name of Imam Khomeyni and are afraid that his thoughts will survive.”‎

It is worth mentioning that on the 31st anniversary of Imam Khomeyni’s death, the ‎Muslim people of Pakistan paid tribute to the great position of the Imam of the Nation ‎by holding a webinar in various cities.‎

Can the United States decline peacefully?