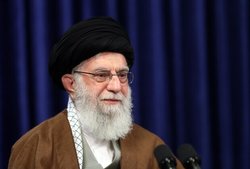 In a tweet on Wednesday, May 20th the Supreme Leader of the Islamic Revolution said that eliminating the Zionist regime doesn’t mean eliminating Jews.‎

RNA – In a tweet on Wednesday, May 20th the Supreme Leader of the Islamic Revolution, Ayatollah ‎Sayyed Ali Khamenei, said that eliminating the Zionist regime doesn’t mean eliminating Jews.‎

In another tweet, he said, “We will support and assist any nation or any group anywhere ‎who opposes and fights the Zionist regime, and we do not hesitate to say this.”‎

Ayatollah Khamenei noted: “This nation should determine what political system should rule ‎there; struggle must continue until then.”‎

‎“A proposal for a referendum to choose the type of govt for the historical country of ‎‎#Palestine was registered with the UN as offered by Iran.”‎