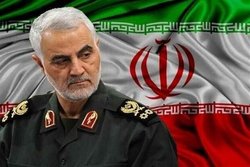 In this letter, former Iran’s IRGC Quds Force Commander Martyr Lieutenant General ‎Soleymani called Muhammad Dhayf, the commander of Hamas’s Izzuddin al-Qassam ‎Brigades, as a ‘living martyr’ and a ‘brave commander’ and sent greetings to the brave nation ‎of Palestine who are under the oppressive siege in the face of eyes of millions of Muslims.”‎

‎“All should be ensured that, the more pressures increase and the more sanctions are ‎intensified, Islamic Republic of Iran will not leave Palestine and Palestinian people alone,” ‎martyr General Soleymani wrote.‎

In a part of latter, martyr General Qasem Soleymani also sent his greetings to the Head of ‎Hamas Political Bureau Ismail Haniyeh and called him [Haniyeh] as a resilient and resistant ‎commander.‎

‎“Defending Palestine is an honor for the Islamic Republic of Iran and Iran will not renounce ‎and give up its duty for the benefit of the world. Palestinians are our friends and enemies of ‎Palestine are our enemies and this is and will be our policy,” martyr Soleymani wrote.‎