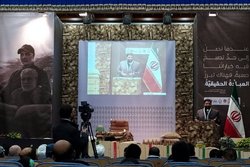 “We have witnessed in the last forty years that the Islamic Revolution has grown from a green sapling into a mighty strong tree which no storm can ever uproot,” Sayyid Shahryar Naqvi said facing an assembly of international seminary students from more than a dozen countries, including those from the US, UK, Australia and Canada.

RNA – “On Thursday, 21st February and almost a week after massive rallies were taken out across the country to mark 41 years of the Islamic Revolution, an impressive event was organized in Imam Sadiq Assembly by Students of Qom (SOQ), an umbrella group of non-Iranian seminary students and revolutionary activists living and studying in the holy city of Qom, according to Tehran Times.

Apart from organizing educational and ideological programs to empower the seminarians of Qom, SOQ is also active in the social and welfare fields, both within and outside Iran.

The program started with guests making their grand entry through the main gate of the Imam Sadiq Assembly, passing through the camouflage-patterned pavilion marked with select verses of the Holy Quran and short statements in honor of the martyrs of Islam.

They were then received by volunteers who welcomed them and presented them a keffiyeh and a Qasem Soleymani badge each, before escorting them in. As the guests made their way to the auditorium, they passed by catchy posters of the Baghdad Airport Attack martyrs and call-to-action banners that talked about the on-going media and psychological war inflicted on the Islamic Republic. While the said posters and banners beautifully decorated the internal walls of the Imam Sadiq Assembly, the flags of the US and Israel made perfect floor mats.

The program was held in English language and was open to anyone who spoke and understood the language. There were separate seating arrangements for men and women, as well as a kids play area where the minor attendees were engaged by the volunteers in educational activities and games with a focus on the Islamic Revolution. It took the efforts of over thirty-five volunteers to make the event a grand success.

The event was emceed by Sayyid Muzzamil Zaidi from the US and began exactly at 7:00 pm with beautiful recitations of Holy Quran and Ziyarat Ashura, followed by the recitation of a few verses of inspirational poetry by Sayyid Raza Jafri.

“Never knew that the mystics lead the prayer in the field; that their ink is a weapon and their chests are a shield,” recited poet Jafri of Texas, US from the podium as stills of martyrs Qasem Soleymani, Abu Mahdi al-Muhandis, Emad Moghniyeh and others adorned the screen.

The poetry recital was followed by meaningful speeches by well-known scholars and speakers including Sayyid Shahryar Naqvi from the US and Shaykh Farrokh Sekaleshfar, a British-born Shi”ah cleric known for his lectures on ethics and spirituality.

Shaykh Sekaleshfar focused his speech on the spiritual side of being a revolutionary while Sayyid Naqvi talked about the “media war” that has been imposed on the Islamic Republic by the mainstream media outlets and has made Iran the target of their propaganda and lies ever since the victory of the Islamic Revolution in 1979.

The speeches were separated from one another with the presentation of informative and inspirational video clips about the Islamic Revolution, Haj Qasem Soleymani and his comrades and what they stood for. One such clip was an animated re-enactment of the 3rd February Baghdad Airport Terrorist Attack by the US Army and its aftermath, which left the audience in tears. Another one was an anthem that began with the words “Hey US! You started, we will end it!” and fueled the energies of the viewers as it called for the revenge of the killing of Haj Qasem Soleymani and his comrades.

Sayyid Haydar Hasanayn from UK, one of the notable speakers at the event, spoke about the duties of a Muslim in the present era with respect to the Second Phase of the Islamic Revolution.

“Dear brothers and sisters, the situation that we find the world around us [in] affects our duty (Islamic duty), it changes our duty... If Allah expects you to be in the battle and you are on your prayer mat, you won’t reach Allah; that prayer won’t elevate you,” remarked Hasanayn.

Sayyid Hasanayn emphasized that although the Islamic Republic and the revolutionaries had to deal with military, economic, media and psychological wars, they still emerged victorious. He said that it was important for Muslims all over the world to recognize their duty to defend the Islamic Revolution and uphold the revolutionary spirit in order to stay victorious over the many different tactics of the enemies of Islam and Muslims.

Shaykh Ali, the director of Islamic Pulse and Pure Stream Media and one of the key speakers at the event, spoke about the Islamic Revolution and the formation of an Islamic civilization. He began his speech by congratulating the audience on the 41st anniversary of the Islamic Revolution of Iran and calling it the “practical implementation of the pure Mohammedan Islam” and “the manifestation of the system of Wilayat al-Faqih” which the enemies conspired against ever since its inception.

In his speech of about fifteen minutes, he explored the pristine principles of the Islamic Revolution. He emphasized that it is essential to understand and uphold the principles on which the Islamic Revolution stood; namely the formation of a monotheistic Islamic society, the system of Divine Justice, spirituality and ethics, success in both worlds, and resistance against the arrogant powers.

“This very principle of resistance against the arrogant powers is the global message of the Islamic Revolution,” remarked Shaykh Ali.

Muzaffar Abbas Haydar, the star of three popular Islamic Pulse series by the names of Hawzah Life, Backfire and Biskit, also had his share of the stage in which he presented a lengthy and elaborate poem on the current affairs of the Muslim Ummah which left the audience admiring the content as well as artistic arrangement of words and phrases.

“The collective dream, brothers and sisters, of all of us is a better world. It is our life”s mission and vision to make it happen; our ambition is to bring the caliphate of the Mahdi (ajtf) into formation,” he recited.

Among the special guests included the ambassador of Yemen in Tehran and the official representative of Ansarallah – Adnan Qasim Ali Qaflah. Grand Ayatollah Mohsen Araki, a senior cleric and a member of the Assembly of Experts, also attended and stayed in the event as the guest of honor and later distributed awards to social media activists and content creators whom Shaykh Ali rightly called the “officers of the media war.”

The program ended with the audience’s loud chants of Death to America, Death to Israel and Labbayk Ya Khamenei.

This event, organized by the international community residing in Qom, proved that the Islamic Revolution of 1979 is not limited to Iran or the Iranians; rather it is a stream of purity and a call for Islamic unity that originated in Iran four decades ago and has been taking whole world by the storm.