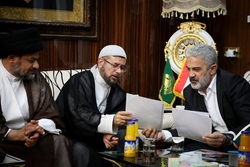 RNA – World Quran Day, a campaign initiated by the Astan (custodianship) of the Holy Shrine of ‎Imam al-Husayn in Iraq, is aimed at promoting the teachings of the Quran and ‎contemplating the Holy Book.‎

This is according to Shaykh Hasan al-Mansouri, the director of the Astan’s Dar al-Quran ‎Centre, who also told IQNA that the campaign seeks to strengthen Muslims’ bond with the ‎Quran.‎

In March, the Astan declared Eid al-Maba’th (the Day Prophet Muhammad was appointed to ‎deliver His mission) as the World Quran Day.‎

It also launched a campaign to promote activities marking World Quran Day, including ‎recitations of the Quran.‎

Qaris from countries like Iran, Syria, Bahrain, Lebanon, Afghanistan, Mali, Nigeria, Indonesia, ‎Kuwait, Burkina Faso and Yemen have joined the ongoing campaign by recording their Quran ‎recitations and sending them to the Centre. ‎

Shaykh al-Mansouri said other objectives of declaring a day as the World Quran Day include ‎boosting unity in the Muslim Ummah and familiarizing followers of other religions with the ‎Holy Book.‎

The Divine Book, the Quran, is a source of security and peace for all mankind and invites all ‎to peaceful coexistence and efforts for eliminating extremism and terrorism, he said.‎

As for the programs held in the campaign, he said they include a competition on Quranic ‎research, as well as activities organized in languages such as English, French, Persian, Urdu ‎and local African languages, in cooperation with institutes in Iraq and abroad to promote the ‎Quran and its message of peace and mercy.‎

The official went on to say that the Dar al-Quran Centre of the Astan also plans to hold a ‎‎“Karbala International Quran Award” as part of the campaign.‎

Despite the challenges, including the current coronavirus outbreak that has cancelled or ‎suspended many activities, the campaign has been received well in Iraq and other countries, ‎Shaykh al-Mansouri stated.‎

He noted that renowned Egyptian Qari Abdul-Fattah Taruti is among the Quran reciters who ‎have contributed to the campaign.‎