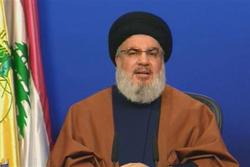 US President Donald Trump's so-called Deal of the Century on the decades-old Israeli-Palestinian conflict is meant to liquidate the Palestinian cause, said the secretary general of Lebanon's resistance movement Hezbollah.

RNA - “It is not a deal. It is Trump’s proposal in order to eradicate the Palestinian cause. None of the Palestinian factions would approve the plan. This is fundamental to frustrating the US scheme,” Seyed Hassan Nasrallah said in a televised speech broadcast live from the Lebanese capital city of Beirut as he addressed supporters on Sunday afternoon, presstv reported.

He hailed the Lebanese nation’s outright rejection of Trump’s Middle East plan, and described it as a danger to Lebanon.

Nasrallah said the most perilous element of the deal is the naturalization of Palestinian refugees in Arab countries such as Lebanon, urging that the plan only serves Trump’s interests and advances his plans in favor of the Israeli regime.

“The Trump administration has recently committed two crimes: Firstly, the assassination of Lieutenant General Qassem Soleimani, the commander of the Quds Force of Iran’s Islamic Revolution Guards Corps (IRGC), Abu Mahdi al-Muhandis, the second-in-command of Iraqi Popular Mobilization Units (PMU) and their companions (near Baghdad International Airport on January 3); and secondly, the announcement of the deal of the century,” he added.

Nasrallah described the Trump administration as the most arrogant, unjust and corrupt in the history of the United States, emphasizing that Washington’s crimes have ushered in the beginning of direct confrontation with resistance forces in West Asia.

“Arabs and Muslims need to forge a united resistance front in order to confront the Great Satan (an epithet for the United States of America),” Nasrallah stated.

Elsewhere in his remarks, the Hezbollah secretary general called on the people of Lebanon to boycott products made in the US as Washington is trying to use the economic leverage to make the Arab country give in to its demands.

Nasrallah also urged all Iraqis to give a befitting response to the assassination of Iran's top anti-terror general, Soleimani, and Muhandis, fully support the PMU forces – known in Arabic as Hashd al-Sha’abi – in the face of US plots to pull the plug on then, expel American troops from Iraq, and help Baghdad play a more active role in the region.

In retaliation for the cowardly airstrike by US terrorists that assassinated General Soleimani, Abu Muhandis and their companions, the IRGC on January 8 fired a number of ballistic missiles at Ain al-Asad air base in Iraq’s Western province of Anbar, which houses American troops.

Trump initially reported that "no Americans were harmed" but subsequent reports revealed that troops were injured in the attack, largely with concussions from the missile blasts.

The US military on February 10 disclosed a more than 50% jump in cases of traumatic brain injury stemming from Iran’s missile attack, with the number of the soldiers diagnosed climbing to over 100.

The Pentagon, in a statement, confirmed that so far 109 US service members had been diagnosed with the injury. It claimed that 76 of them had returned to duty.

On January 5, Iraqi lawmakers unanimously approved a bill demanding the withdrawal of US troops.

The 78-year-old politician said at the time that Iraq rejects violation of its sovereignty, particularly the US military's violation of Iraqi airspace in the act of terror.