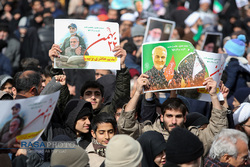 Millions of Iranians from all walks of life have taken to the streets across the country to celebrate the 41st anniversary of the victory of the Islamic Revolution, which toppled the US-backed Pahlavi regime in 1979.

RNA - In Tehran, large groups of people, braving freezing temperatures, thronged the streets across the capital leading to the iconic Azadi Square.

Also in other cities and towns across Iran, people attended similar rallies to renew their allegiance to the ideals of Imam Khomeini, the late founder of the Islamic Republic and express their support for the cause, aspirations, and ideals of the Islamic Revolution.

Addressing the rally-goers, Iran’s President Hassan Rouhani said the US sanctions against Iran have failed to bring the Iranian nation to its knees.

President Rouhani said the US finds it unbearable that the Islamic Revolution remains in place 41 years after bringing down the Pahlavi regime, which was allied with Washington.

This year’s mass rallies are especially significant as they coincide with the 40th-day memorial for Lieutenant General Qassem Soleimani who was assassinated by a US drone strike in Baghdad in early January.

According to Press TV, Demonstrators chanted slogans against the US and condemned the highly hostile agenda that Washington has been pursuing against the Iranian nation over the past four decades.

Moreover, the Iranian demonstrators used the occasion to voice their outrage at a contentious plan recently unveiled by the Trump administration with the aim of ending the decades-long Israeli-Palestinian conflict.

The Iranian rally-goers all believe that the enemies’ threats and sanctions will only make the Islamic Revolution more powerful and make people further united. They say this is a lesson that that the US and its allies have never learned.