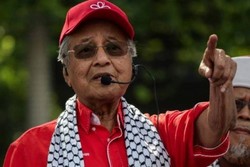 RNA - “This deal will only bring more conflict to the region, and will antagonize billions of people around the world,” Mahathir said in the opening speech at the third conference of The League of Parliamentarians for al-Quds in Kuala Lumpur on Saturday.

He noted that Trump’s plan “only recognizes Israeli occupation and completely ignores the rights of oppressed Palestinians.”

Mahathir highlighted that the so-called deal of the century was devised without consulting Palestinians, and is only supported by Israeli officials.

Pointing to Israel’s acts of aggression against the Palestinians, the Malaysian premier said that his country will not keep silent on the oppression of Palestinians by the Israeli regime.

“We are duty-bound and this responsibility is further amplified when powerful nations that had styled themselves as the defender of justice and freedom choose to be silent while the atrocities are being committed.

“In other words, if we too choose to be silent, the blood from the murders and killings of the Palestinians by the Israelis is on our hands as well,” Mahathir pointed out.

He pointed to a report by prisoners' rights group Addameer about more than 12,000 Palestinian children detained by Israel since 2000 and held in the same detention facilities as adult Palestinian prisoners, the 94-year-old Malaysian prime minister said humanitarian organizations such as UNICEF have long documented the Tel Aviv regime’s violations against Palestinian children, who are prosecuted in Israeli military courts.

“It is clear that these detainees are being used by Israel to exchange for Israeli soldiers captured during incidents. For all these, Israel should be condemned and punished,” Mahatir said.

Kuwait speaker: Trump’s deal must be hurled into dustbin of history

Meanwhile, the speaker of the Kuwaiti National Assembly, Marzouq al-Ghanim, said the ideal place for Trump’s plan is the dustbin of history.

At the end of his speech at the emergency session of the Arab Parliamentary Union in the Jordanian capital city of Amman on Saturday, Ghanem threw a copy of the so-called deal of the century into a dustbin, saying, “It is the natural place of the plan.”

He added, “We offer the occupiers (Israelis) financial packages, which are twice as much the aid offered to the Palestinians under the [so-called] deal of the century, in order to return to where they came from. That will be a real deal of the century indeed.”

On January 28, Trump unveiled his so-called deal of the century, negotiated with Israel but without the Palestinians.

Palestinian leaders, who severed all ties with Washington in late 2017 after Trump controversially recognized Jerusalem al-Quds as the capital of the Israeli regime, immediately rejected the plan, with President Mahmoud Abbas saying it “belongs to the dustbin of history.”

Palestinian leaders say the deal is a colonial plan to unilaterally control historic Palestine in its entirety and remove Palestinians from their homeland, adding that it heavily favors Israel and would deny them a viable independent state.