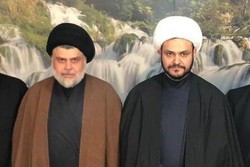 Influential Iraqi Shiite cleric Muqtada al-Sadr in a meeting with leaders of the country's popular forces conferred on ways to end the US occupation of the country.

RNA - The Arabic-language al-Mayadeen news website reported on Monday that the meeting was hosted by Secretary General of al-Nujaba Movement Sheikh Akram al-Kaabi and attended by Head of the Kata'ib Sayyid al-Shuhada (KSS) Abu Alaa al-Wala'i and a representative of Asa'eb al-Haq resistance group.

The information center of al-Nujaba Movement released images of the meeting which was aimed at coordination to expel the American forces from Iraq.

Al-Kaabi had on Sunday reassured the family of IRGC Qods Force Commander Lieutenant General Qassem Soleimani, who was savagely assassinated by the terrorist army of the US at Baghdad International Airport, that resistance groups of the region will exact revenge on American perpetrators of the criminal act.

In his visit to the house of martyred General Soleimani in Tehran, al-Kaabi said that the resistance movement will take revenge on perpetrators of US terrorist act in assassinating General Soleimani very soon.

Iraq will not be a safe place for American mercenaries and terrorists anymore, he emphasized.

The resolution, which was passed anonymously, instructed the government to cancel a request for military assistance to the US-led coalition, which was issued in response to the rise of the Islamic State of Iraq and the Levant (known as ISIL, ISIS or Daesh) terror group.

According to Fars News Agency, the resolution stated that Iraqi military leadership has to report the number of foreign instructors that are necessary for Iraqi national security.