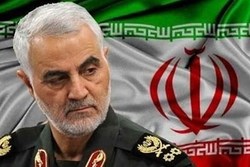 RNA - Al-Mayadeen reported that Haniyeh's comments indicated that the resistance front will continue its path more powerfully while General Soleimani's daughter, Zeinab, stressed that a harsh revenge will be taken from the US.

"The red flags hoisted during the funeral ceremony of General Soleimani showed that revenge operation for these martyrs is an inescapable outcome," it added.

Daughter of General Soleimani who was assassinated by the US in Iraq on Friday warned families of the American soldiers stationed in the region that they will not be able to enjoy calm and peace anymore as their loved ones will be targeted by the resistance forces.

"Yesterday, the Iraqi parliament approved a plan for the US withdrawal. The families of the US soldiers in West Asia who have witnessed the US abjection in battles in Syria, Iraq, Lebanon, Afghanistan, Yemen and Palestine will spend their days, while waiting for their sons' death," Zeinab Soleimani said, addressing millions of mourners who had gathered in Tehran on Monday for the funeral ceremony of General Soleimani.

She addressed Trump who had personally ordered assassination of General Soleimani, and said, "Hey mad Trump, the Gambler! You are the symbol of ignorance and a plaything in the hands of the Zionists. You should not think that everything has ended with my father's martyrdom."

Zeinab underlined continued support for Supreme Leader of the Islamic Revolution Ayatollah Seyed Ali Khamenei, and said each of the Resistance Front leaders in Lebanon, Syria, Palestine, Iraq and Yemen is enough to annihilate Trump and his ruling system.

Meantime, Haniyeh condemned the US assassination of General Soleimani, and said all Muslims will continue what the top general has done.

“I announced that the resistance project in the Palestinian lands will continue, it will not be loosened and there will be no retreat. These assassinations and martyrdoms will boost our insistence on stability and resistance and we will continue this path until the freedom of Holy Qods and the Palestinian territories, as well as freedom of regional nations,” Haniyeh said at the funeral procession of General Soleimani.

He reiterated that General Soleimani was "the martyr of Qods”.

He made the remarks in the funeral procession of the General in Tehran, adding he devoted his life for supporting the Palestinians and oppressed people of the region.

Haniyed extended his condolences to Supreme Leader of the Islamic Revolution Ayatollah Seyed Ali Khamenei, the Iranian government, as well as the Iranians on the martyrdom of General Soleimani.

“What the Americans have committed is an atrocity crime that has many manifestations in occupation of Palestine,” he underscored.

He called on the nations and governments to bring to justice the perpetrators of the Soleimani's assassination.