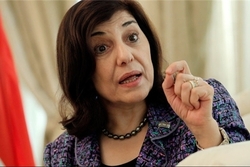 President of the United States Donald Trump is blindly undertaking Israeli schemes in the region, the political and media adviser to Syrian President Bashar al-Assad noted.

RNA - “We have reached a stage where Trump is blindly working to fulfill the wishes of Zionism. Zionism sought to deal a blow to the axis of resistance by assassinating the two fighters. However, it only consolidated the resistance front,” Bouthaina Shaaban said in Damascus on Sunday, condemning the assassination of Islamic Revolution Guards Corps (IRGC) Qods Force Commander Lieutenant General Qassem Soleimani, and the second-in-command of the Iraqi Popular Mobilization Units (PMU), Abu Mahdi al-Muhandis.

She then cited a report published by the Israeli Haaretz daily that Trump had informed Israeli officials of his intention to assassinate Soleimani without consulting Congress.

“We are facing an act which Trump perpetrated simply to serve the interests of Israel,” she added.

The assassination of Soleimani was shocking, the Syrian official stated, emphasizing that its repercussions will not be confined to days and months, but will rather last long.

“America took an action that will have adverse effects on the US in all arenas. The United States proved itself to be a government that commits terrorist and criminal acts by the law of the jungle, and violates the constitution by skirting Congress,” the high-ranking Syrian official underlined.

She also hailed a decision made by the Iraqi parliament concerning the withdrawal of US military forces from Iraq as well as Iran’s precision firing of missiles at US bases in Iraq.

Iraqi lawmakers unanimously approved a bill demanding the withdrawal of all foreign military forces led by the United States from the country. Iraqi caretaker Prime Minister Adel Abdul-Mahdi called on the United States to dispatch a delegation to Baghdad tasked with formulating a mechanism for the pullout. The prime minister said Iraq rejects violation of its sovereignty, particularly the US military's violation of Iraqi airspace in the airstrike that assassinated General Soleimani last Friday.

The US State Department bluntly rejected the request on Friday.

Early on Wednesday, the IRGC targeted the US air base of Ein Al-Assad in Iraq after launching a wave of attacks to retaliate the assassination of General Soleimani. The IRGC has called for a complete withdrawal of US troops from the Arab country.

The strike came as no surprise since Iran had vowed to take a “harsh revenge” in the wake of the US act of terror. Supreme Leader of the Islamic Revolution Ayatollah Seyed Ali Khamenei later said Iran’s missile strike on US bases in Iraq was just “a slap".