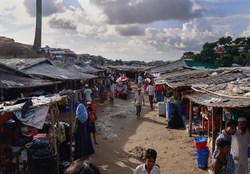 About 200 Rohingya Muslims arrested at sea last month by Myanmar's navy have been sent back to Rakhine, where state-sponsored violence has prevailed in recent years.

RNA - Images showed 17 men, women and children looking exhausted from their ordeal as they climbed down from a wooden boat on to a beach near Sittwe, the capital of the western state of Rakhine, on Monday.

Wearing identification numbers around their necks, they lined up on the sand before being escorted away by armed police.

The Rakhine state minister for security and border affairs said they were taken to Thechaung camp.

The remaining 156 were transported further north to Ngakhuya camp in Maungdaw township. The camp is a processing site for returning refugees on the Bangladeshi border.

Colonel Min Than said their fate would be decided by the Union Enterprise for Humanitarian Assistance, Resettlement and Development (UEHRD), a government department overseeing Rakhine. "I'm not sure whether action will be taken against them or not."

The captured Rohingya came from both sides of the border, Min Than said, although it was unclear how they ended up on the same boat.

Seasonal calmer waters have seen an increase in the number of Rohingya Muslims putting their lives in the hands of traffickers in a desperate bid to reach Malaysia or Indonesia by boat.

But few make it as far as Kawthaung, Myanmar's southern-most tip, where the group of 173 was picked up mid-December.

Myanmar's Rakhine came to global attention in 2017 when more than 750,000 Rohingya, mostly women and children, fled to neighboring Bangladesh to escape a military crackdown that UN investigators have said was carried out with “genocidal intent.” Bangladesh was already hosting some 200,000 Rohingya when the exodus began.

The violence against Rohingya Muslims has also seen Myanmar accused of "genocide" at the UN's top court in The Hague.

Thousands still remain in Myanmar. They live under apartheid-like conditions, confined to camps and villages and denied access to healthcare and education.