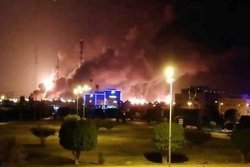 Drone attacks on two Saudi Aramco facilities will lead to 5.7 million barrels or 50 percent drop in the oil giant’s production, an official in Riyadh declared.

RNA - Saudi Energy Minister Prince Abdulaziz bin Salman stated that the attacks crippled the facilities, forcing Saudi Aramco to partially halt crude and gas production, but the company was working on recovering the lost quantities and would make an update within 48 hours.

The decrease in supplies would be partially compensated through the company’s oil reserves, the energy minister promised.

Yemen’s Houthi Ansarullah movement announced on Saturday that its drones had successfully attacked two oil plants in the heart of Saudi Arabia’s oil industry, stressing that the attacks were a firm response to Riyadh’s relentless bombardment of Yemen.

Oil analysts and traders say that the impact of the attack on crude prices could be double digit and the commodity’s price could jump as much as $10 per barrel.

In mid-May, Yemeni soldiers, backed by allied fighters from Popular Committees, launched a major operation against the strategic oil facility in Saudi Arabia in retaliation for the Riyadh regime’s devastating military aggression and siege of the impoverished country. Following the attack, Saudi Arabia stopped pumping crude oil on the major pipeline across the country. The retaliatory attack also led to the rise of oil prices and fall of stock markets in Persian Gulf Arab countries.

The attack bears extra significance at this stage of the war because the Yemeni forces could fly armed drones so far and carry out precision strikes and then fly them back while evading all Saudi defenses on the way. The long-range drones open unlimited possibilities for Yemeni resistance forces, which have already surpassed all expectations by surviving the massive Saudi onslaught and mounted a potent response with an arsenal of ballistic missiles.

Yemen's Ansarullah movement has also warned that its recent attack on a major Saudi oil facility was the start of operations against 300 vital targets in Saudi Arabia and the UAE.

The Ansarullah said its drone attack on pumping stations of the Saudi state oil company Aramco was the start of operations against 300 vital targets. The group added that other planned targets include military headquarters and facilities in Saudi Arabia and the United Arab Emirates.

The US-based Armed Conflict Location and Event Data Project (ACLED) announced in late August that the total number of reported fatalities in Yemen has passed the 91,000 mark over the past four and a half years.

France, the United States, the United Kingdom and some other Western countries have faced criticisms over arms sales to the Saudi Arabia and the UAE, whose aggression against Yemen has affected 28 million people and caused what the United Nations calls “one of the worst humanitarian crises in the world". According to the world body, Yemen is suffering from the most severe famine in more than 100 years.