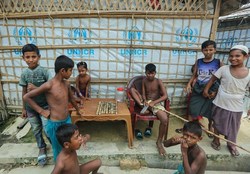 A United Nations fact-finding mission says Myanmar continues to harbor genocidal intent against Rohingya Muslims, noting that the Rohingya who still remain in the country are facing serious risk of genocide.

RNA - The mission to Myanmar, set up by the UN Human Rights Council last year, said in a new report on Monday that some 600,000 Rohingya are living in “deplorable” conditions in Myanmar’s Rakhine state.

The mission is to present its final report on Myanmar in Geneva on Tuesday.

Myanmar is “denying wrongdoing, destroying evidence, refusing to conduct effective investigations and clearing, razing, confiscating and building on land from which it displaced Rohingya,” the report said.

The mission believes Rohingya Muslims are living in “inhumane” conditions.

Christopher Sidoti, an Australian human rights lawyer and panel member, said in a statement accompanying the report that the “threat of genocide is continuing for the remaining Rohingya.”

The UN investigators also warned in their report that the repatriation of a million people already driven from Myanmar by the army remains “impossible.”

“These facts underscore the impossibility of return for the nearly one million Rohingya refugees, mostly in Bangladesh.”

Myanmar’s security forces stand accused of killing, gang rape and arson during a crackdown that forced more than 740,000 people from homes in Rakhine into neighboring Bangladesh in August 2017.

The fact-finding mission said the army operations in 2017 amounted to “genocide.” It called for the prosecution of top generals, including army chief Min Aung Hlaing.

The UN panel said it had passed the evidence it gathered from nearly 1,300 interviews with witnesses to a new investigative mechanism for Myanmar, which will support any future prosecution in international courts.

It said it had a confidential list of over 100 names, including officials, suspected of being involved in crimes against humanity and war crimes.

The UN investigators repeated calls for foreign governments and companies to sever all business ties with the Myanmar military, urging the establishment of a “moratorium” on investment and development assistance in Rakhine.

The Rohingya have inhabited Rakhine for centuries, but the state denies them citizenship.