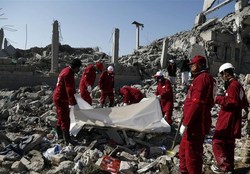 As the brutal war in Yemen grinds on, the British government has just admitted that it has breached an arms sales ban to Saudi Arabia.

RNA - The International Trade Secretary, Liz Truss, was forced to apologise to court for two breaches of a pledge not to license military-related exports to Saudi Arabia that could be used in the War on Yemen.

In late June the court of appeal ruled arms sales to Saudi Arabia unlawful and accused ministers of ignoring whether airstrikes that killed civilians in Yemen broke humanitarian law.

The legal challenge was brought by the advocacy group, Campaign Against Arms Trade, which successfully argued that arms sales to Saudi Arabia might be used in a serious violation of international humanitarian law.

Truss has now admitted that the granting of licenses for £435,000 of radio spares and a £200 air cooler for the Royal Saudi Land Forces were in breach of the court ruling.

The admission comes in a letter to the Commons Committees on Arms Export Controls, where Truss discloses that 260 data-x-items of radio spares for the Saudi military had been issued in July, more than two weeks after the court ruling.

In the letter Truss states: “I have apologised unreservedly for the error in granting these two licenses”.

Truss’ admission underlines the reluctance of the British government to discontinue arms sales to Saudi Arabia, a key British ally in the Middle East.

British arms sales to Saudi Arabia have been a major contributory factor to the conflict in Yemen, where more than 10,000 civilians have been killed by Saudi-led coalition bombings, which began in March 2015.

A former Ministry of Defence senior civil servant and defence attaché to Saudi Arabia and Yemen, John Deverell, told the Guardian on June 18 that “Saudi bosses absolutely depend on BAE Systems”.

Referring to the Yemen conflict, Deverell added: “They [Saudis] couldn’t do it without us”.

BAE Systems is Britain’s biggest arms company, which according to the Guardian has been “subcontracted” by the British government to provide “weapons, maintenance and engineers inside Saudi Arabia”.