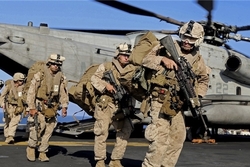 Iran’s Interior Minister Abdolreza Rahmani Fazli said that Washington, Tel Aviv, and a few other countries are the main sponsors of terrorism, extremism and violence in the region, adding that the US is following no objective but to sow discord among the countries of the region.

RNA - “Extremism, terrorism, and violence in the region are all supported by the US, the Zionist regime and few other countries. These states provided terrorist groups with money, weapons, and intelligence,” Rahmani Fazli said, in a Friday meeting with Kyrgyzstan’s Prime Minister Mukhammedkalyi Abylgaziev.

“Safeguarding the regional security should be done by regional states,” he said, highlighting that cooperation between countries can create sustainable peace and security.

“The US is seeking to sow the seed of discord in the Muslim world,” Rahmani said, adding, “US and Israeli regime only consider their own benefits and do nothing positive for the region.”

Pointing to bilateral relations between the two countries, he said that economic and cultural ties are of utmost importance which need to be expanded.

For his part, Abylgaziev appreciated the invitation and hoped that he could make the visit in the near future.

The Kyrgyz minister called for expanding economic ties and establishing a direct flight route between the two countries.

He said that Kyrgyzstan is against anti-Iran sanctions because such measures create problems for all countries which have friendly relations with Tehran.

Heading a political delegation, the Iranian minister arrived in Bishkek on Thursday to discuss bilateral cooperation with Kyrgyz officials. The two sides have signed a security and disciplinary cooperation agreement.

The US is the main cause of insecurity in the region, Zarif said, addressing the Stockholm International Peace Research Institute (SIPRI) on August 21.

He also underlined the need for all countries to choose multilateralism not as an option but as a necessity.

Zarif, meantime, blasted the US for withdrawing from the 2015 nuclear deal and practicing economic terrorism against Iran, and said, "All countries should respect international rights."

A day before Zarif made the remarks, Iran's Ambassador and Permanent Representative to the United Nations Majid Takht-e Ravanchi also criticized the massive presence of US forces in the region, describing it as the main cause of instability and insecurity.

He described deployment of more than 70,000 US servicemen as one the main reason behind insecurity and instability in the Middle East region, emphasizing that Pentagon has active military presence in all Persian Gulf states except Iran.

“The number of foreign military installations in the Middle East has jumped from four in 1991 to 41 in 2018. Nearly all of them belong to the US, which mark the highest concentration of military sites in the world,” he said.