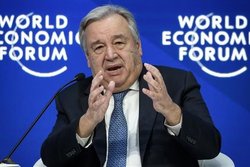 Secretary General of the United Nations Antonio Guterres has warned of escalating unease in the Persian Gulf, saying it is "absolutely essential" to take necessary measures to dial down tensions.

RNA - Guterres was referring to the escalating crisis between Iran and the United States in the wake of President Donald Trump's unilateral move to pull his country out of the landmark nuclear deal, officially known as the Joint Comprehensive Plan of Action (JCPOA), signed between Tehran and major world powers in 2015.

"It is absolutely essential to avoid any escalation of the situation," the UN chief told reporters.

He added that "the world cannot live with a major confrontation in the [Persian] Gulf."

Guterres said he has "no particular insight" into the likelihood of a meeting between Iran's President Hassan Rouhani and his American counterpart on the sidelines of the 74th United Nations General Assembly session starting on September 23.

However, he emphasized that any effort to avoid a confrontation "will always be welcome."

Tensions between Iran and the US increased after Washington's unilateral withdrawal from the multilateral deal. Trump has since been following what he calls a campaign of “maximum pressure” on the Islamic Republic.

Ever since quitting the JCPOA, Trump has been trying to force Iran into accepting a more wide-ranging alternative that curbs Tehran's missile program and regional influence .

Speaking in an interview with American television business news network CNBC on Thursday, US Treasury Secretary Steven Mnuchin said Washington will press ahead with its campaign of "maximum pressure" against Iran, even after President Trump announced that he had fired National Security Adviser John Bolton, seen as the architect of the White House’s hard-line policy toward the Islamic Republic.

Mnuchin said that there is no current plan for Trump to hold a meeting with his Iranian counterpart at the United Nations General Assembly in New York. Mnuchin, however, said the US president is open to meeting with Rouhani with no preconditions.

Also on Thursday, the US president claimed that he believes that Iranian authorities want a meeting with him.

“I can tell you that Iran wants to meet,” he told reporters at the White House.

In a telephone conversation with his French counterpart Emmanuel Macron on Wednesday, Iran's President Rouhani said that there is no point in talks with the United States as long as it keeps sanctions against the Islamic Republic in place.

"From the viewpoint of Iran's government, parliament and people, as long as there are sanctions in place, there is no point in negotiating with the US," he said.

As a signatory to the landmark nuclear deal, China said on Monday that the US strategy of exerting "maximum pressure" on Iran is the root cause of the ongoing tensions over Tehran’s nuclear program, urging Washington to end its wrong practices.

"We believe that the maximum pressure by the US is the root cause of the current Iranian nuclear tension. The US should abandon wrong practices, such as unilateral sanctions and maximum pressure on Iran," Hua Chunying, spokesperson of Chinese Foreign Affairs Ministry, told reporters in Beijing.