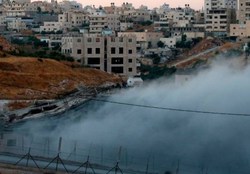 The Palestine Liberation Organization has warned that Israeli Prime Minister Benjamin Netanyahu’s declaration to annex the Jordan Valley and the northern Dead Sea if he wins the September 17 snap election is the tip of the iceberg.

RNA - According to a weekly report by the PLO's National Office for the Defense of Land and Resistance of Settlement released on Saturday, Netanyahu plans to annex 75 percent of Area C of the occupied West Bank, Arabic-language Ma’an news agency reported.

Area C accounts for more than 60 percent of the occupied West Bank, and would form a significant part of a future Palestine state under the so-called two-state solution. It is fully controlled by Israeli authorities.

The report added that the 69-year-old Israeli prime minister, who is the chairman of the Likud-National Liberal Movement, is betting in his first step on an additional free gift provided by US President Donald Trump’s administration to help him win the elections just like previous gifts when Washington recognized occupied Jerusalem al-Quds as the capital of Israel, and later recognized Israeli sovereignty over the occupied Golan Heights.

The office further explained the details of the annexation plan for the Jordan Valley and northern Dead Sea areas, saying Highway 80 will apparently serve as a border of the targeted area.

Palestinians in Area A and B, which are entirely under the control of the Palestinian Authority, will include 15 communities with a population of 44,175. They cover an area of ​​250,000 dunams (250 square kilometers) of Palestinian land, the office highlighted.

The office went on to say that the Israeli justice minister, Ayelet Shaked, who leads a coalition of right-wing parties, has been pushing for the approval of a decision in the Tel Aviv regime to annex the Jordan Valley immediately without the need to pass a legislation from the Knesset (parliament), as opposed to the issue of Jerusalem al-Quds, and vowed to vote immediately in favor of such a decision.

It said Israeli authorities last week had notified the municipal and village councils in Burin, Huwwarah, Asirah al-Qibliyah, Madama, Urif, and Einabus of plans to expropriate new areas of land in order to expand Yitzhar settlement, which is located south of the northern West Bank city of Nablus.

At the same time, Israeli officials have seized about 100 dunams of land from the villages of Qaryut and Jalud, south of Nablus, as well as Turmus Ayya town in order to expand construction work at the settlement of Shilo.

According to Press TV, Israel occupied the West Bank in the 1967 Six-Day War, in a move never recognized by the international community.

On Tuesday evening, Netanyahu promised to annex the Jordan Valley if he wins next week's general elections, drawing sharp criticism from the Palestinians as well as countries in the Middle East, including Jordan, Iran, Turkey, Saudi Arabia and the United Arab Emirates.

He also reiterated his intention to annex Israeli settlements throughout the West Bank if re-elected, and in coordination with the US president.

Netanyahu went on to say that he would wait for the Trump administration to announce its controversial proposal for “peace” between the Israeli regime and the Palestinians; dubbed “the deal of the century,” before the Tel Aviv regime makes any major policy changes on the status of Israeli settlements.

Hezbollah Ready for Operations inside Israel