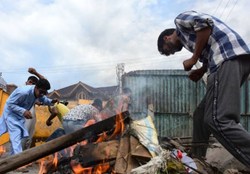 An 18-year-old man has succumbed to his wounds in Indian-administered Kashmir nearly a month after he was injured during a protest, marking the first official death since India flooded the Muslim-majority Himalayan region with troops.

RNA - "He was reportedly injured with a blunt object in a law and order situation where a violent crowd was indulging in stone pelting," Jammu and Kashmir Director General of Police, Dilbag Singh, said on Wednesday.

The death of Asrar Ahmed Khan, a resident of Srinagar's Ilahibagh area, who was injured on Aug 5, has prompted tighter security in parts of the city fearing a reaction.

An unnamed official said Khan was undergoing treatment in an intensive care ward at Srinagar's Sher-i-Kashmir Institute of Medical Sciences after he was admitted with head injuries.

Protesters alleged that Khan had been hit by a tear gas shell, though authorities suspect it may have been a stone thrown by protesters, Singh said.

"(the) Matter (is) under investigation," Singh said.

Two deaths, which have been challenged by the authorities, were reported earlier by the media.

On August 5, Indian Prime Minister, Narendra Modi, delivered a surprise executive decree to strip the India-controlled portion of the Muslim-majority Himalayan region of its special status, claiming that the decision was necessary for Kashmir’s economic development and to stop “terrorism.”

According to Press TV, the New Delhi government dispatched thousands of additional troops to the Himalayan region, declared a strict curfew, shut down telecommunications and internet services, and arrested political leaders and pro-independence campaigners.

Pakistan was quick to denounce India’s recent move as illegal, with Prime Minister Imran Khan saying he was considering taking the matter up with the United Nations Security Council.

The Himalayan region is divided between India — which rules the populous Kashmir Valley and the Hindu-dominated region around Jammu city — and Pakistan — which controls a wedge of territory in the west.

Both countries claim all of Kashmir and have fought three wars over the territory.