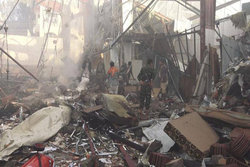 According to United Nations investigators, the United States, Britain and France may be complicit in war crimes by arming the Saudi-led coalition that has led a bombing campaign in Yemen, which has killed tens of thousands since 2015 and caused the death by starvation of an estimated 85,000 children. This comes as aid workers say over 100 people were likely killed Sunday when air raids launched by the US-backed, Saudi-led coalition leveled a prison in the southwestern city of Dhamar.

RNA - Immediately, 2020 presidential hopeful Bernie Sanders, who spearheaded the Senate’s passage of a War Powers Resolution that would end US involvement in the Yemen war, tweeted, “US bombs, logistical support, and intelligence for the Saudi dictatorship’s airstrikes make us complicit in this nightmare. Congress has declared this war unconstitutional. We must now stand up to Trump and defund all US involvement in these horrors.”

This is while Saudi Arabia and the UAE are also complicit in war crimes in Yemen. After the Trump administration’s endorsement, the Saudi-UAE alliance has even less incentive to prevent civilian casualties and new humanitarian disasters. Saudi Arabia and its allies are more likely to accept a peace process if it is clear that the United States won’t support an open-ended war on Yemen and won’t provide the military assistance required to keep the war apparatus going.

Yet Trump has shown little sign of pressuring his Saudi and Emirati allies, least of all over Yemen. The only realistic check left is in Congress and the UN, where more voices are asking why the US is helping to perpetuate the world’s worst humanitarian crisis.

The US currently extends huge support to Saudi Arabia in Yemen centered on arms supplies, intelligence and information sharing. There are also US troops involved in combat operations. The Trump administration has apparently stopped the aerial refueling of Saudi warplanes involved in the conflict and called for a negotiated settlement. But the United States cannot afford to abandon its allies and hope for the best. Undermining the Saudi-led coalition would make it impossible for the US to sell more weapons and justify its presence in the Persian Gulf.

Which is why the US has not cut off their support to the Saudi coalition in Yemen, despite heavy criticism over their role in the country’s humanitarian disaster.

The World Health Organisation says some 80,000 people have been killed since the coalition intervened in 2015, but rights groups state the death toll could be five times as high. Sadly, the consciousness has fallen asleep again, too occupied with the spectacle of Trump and the rise and fall of stock prices. It is simply incredibly - and outright sickening - that the suffering of 22.2 million people could be overlooked, or simply ignored.

According to Fars News Agancy, the UN needs to confront those in power, point to their war crimes and contradictions. How can any Western politician say that he is in favor of peace when he allows the selling of arms to a Medieval regime killing thousands every year? How can he say that he will fight for what is right when he turns a blind eye to human rights violations?

Progress has been made. The Netherlands, Canada, Belgium, Ireland and Luxembourg have succeeded in getting an investigation by the UNHR into what is happening in Yemen underway. In the US Senate, a bill was proposed to stop the aid that the US provides to the Saudis in the Yemen war (although it was later voted down). There have been protests in Europe against Saudi-led airstrikes.

But more can be done. The spirit of the anti-war protests is still alive, and its power must be wielded again. This time to stop the dropping of Western bombs on remote Yemeni villages, to stop the funding and support of a deadly war, and to stop the biggest humanitarian disaster in the world today.

Report: Israeli Soldiers Flee in Panic from Military Base Hit by Hezbollah