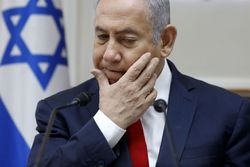 Once again, Israeli Prime Minister Benjamin Netanyahu promised to annex illegal Israeli settlements in the occupied West Bank. This means extending Israeli full control to all settlements located in the areas supposed to be part of the future Palestinian state.

RNA - Palestinian officials have slammed Netanyahu’s remarks and called on the international community to take serious action. Anti-settlement groups, meanwhile, say Israel has already been carrying out measures that make the annexation of all settlements more feasible in a blatant challenge.

Netanyahu pledged to do so before Israel's last election in April, but the results left him unable to form a coalition regime and prompted the calling of a fresh poll on September 17. Now he’s reiterating his promise. Observers say it came amid a campaign push to draw supporters of far-right factions to his Likud party in the run-up to Israel's general election.

At the end of the day, Palestinians argue that whether Netanyahu's reaffirmation of the illegal annexation promise is part of his election campaign or not, the Israeli regime will never allow Palestinians to have their own state and will continue to swallow more land and expand settlements.

Dozens of Palestinians Injured in Great March of Return