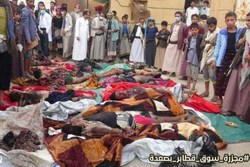 The United Nations’ investigators announced that they suspect the US and its chief Western allies, the UK and France, of complicity in “war crimes” in Yemen, citing their provision of arms, logistics, and intelligence to a Saudi-led coalition invading the country.

RNA - The experts offered the findings in Geneva on Tuesday, stating that “the legality of arms transfers by France, the United Kingdom, the United States, and other States remains questionable, and is the subject of various domestic court proceedings”, Yemeni News reported.

The trio has been giving out arms to the Saudi regime and a coalition of its vassal states, which have been engaged in a bloody military campaign against Yemen since early 2015. The weapons include various precision armaments, which have been used on numerous occasions against densely-populated areas.

Observers say the coalition’s deployment of such guided munitions against civilians refutes its claim that the non-combatant casualties resulting from its attacks have been caused “by accident".

Individuals in the former Yemeni administration and the coalition, including Saudi Arabia and the United Arab Emirates, “may have conducted airstrikes in violation of the principles of distinction, proportionality, and precaution”, the UN report said.

They “may have [also] used starvation as a method of warfare, acts that may amount to war crimes”, the report added.

The UN report said its independent panel had sent a secret list to UN Human Rights Chief Michelle Bachelet, identifying “individuals who may be responsible for international crimes”.

Its appendix lists the names of more than 160 “main actors” among Saudi, Emirati, former Yemeni top brass and the Houthi movement as well, although it did not specify whether any of these names also figured in its list of potential suspects.

The UN panel, meanwhile, added it had received allegations that Emirati and affiliated forces have tortured, raped, and killed suspected political opponents detained in secret facilities.

Saudi Arabia has been striking Yemen since March 2015 to restore power to fugitive president Mansour Hadi, a close ally of Riyadh. The Saudi-led aggression has so far killed tens of thousands of Yemenis, including hundreds of women and children. Despite Riyadh's claims that it is bombing the positions of the Ansarullah fighters, Saudi bombers are flattening residential areas and civilian infrastructures. Weddings, funerals, schools and hospitals, as well as water and electricity plants, have been targeted, killing and wounding hundreds of thousands.

According to Fars News Agancy, the US has been supporting the Saudi-led war against Yemen. The American patronage has featured aerial refueling, which the US only stopped earlier in the year after the Saudi-led coalition grew independent of it, as well as logistical and commando support. A year after the war was launched, President Donald Trump made his maiden foreign visit to Saudi Arabia, announcing more than $100 billion in arms sales to the kingdom.