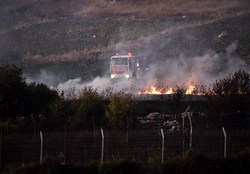 An Israeli television network admits that the recent attack carried out by Hezbollah fighters against Israeli army positions proved the Lebanese resistance movement has the capability to strike targets “considered safe” inside the occupied territories.

“The (Israeli) soldiers did not properly plan the route and estimated that they are not exposed to the enemy behind the border,” the report added.

On Sunday, Hezbollah fired a number of anti-tank missiles at an Israeli army base and vehicles near the border in response to an Israeli air raid last week that killed two of its fighters in Syria, as well as an Israeli drone attack on southern Beirut.

According to the Lebanese resistance movement, the missiles launched from Lebanon destroyed an armored personnel carrier in Avivim in northern Israel, killing or wounding those inside it. The Israeli military, however, alleged the attack did not lead to any casualties. The Israeli army said it fired 100 shells inside Lebanon in return.

On Monday evening, Hezbollah Secretary General Sayyed Hassan Nasrallah warned the Israeli regime against any future attacks on Lebanon, stressing that all Israeli forces will be at risk in such a case.

According to Press TV, Sayyed Hassan Nasrallah said Sunday’s operation by Hezbollah fighters in which an armored Israeli vehicle was hit and completely destroyed, was meant to send the message to Israel that “if you attack, then all your border and forces will be at risk.”

“We thank God [for this victory],” he said, and also expressed gratitude towards the group’s fighters and commanders, who spent eight consecutive days carrying out the operation.

Nasrallah added that the through the latest operation against the Israeli forces, the resistance group broke the "biggest red line" by targeting forces across the border and inside the occupied territories.