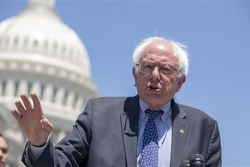 Sen. Bernie Sanders (I-Vt.), a 2020 White House candidate, said on Sunday that he believes President Donald Trump “creates the climate” for events like last weekend’s mass shooting in El Paso, Texas, but that he does not believe the American president wants “to see somebody get shot”.

RNA - “I think that what [Trump] has created in this country with his incredible rhetoric, his racist rhetoric where he calls Mexicans rapists and criminals, where he almost condones in a rally when someone was attacking somebody … he creates a climate where we are seeing a significant increase in hate crimes in this country,” Sanders stated on CBS’s “Face the Nation” Sunday.

“He is creating the kind of divisiveness in this nation that is the last thing that we should be doing,” Sanders added, noting, “He creates the climate, but do I think that he wants to see somebody get shot? Absolutely not.”

The suspect in the El Paso shooting, in which at least 22 people were killed, has been tied to a  manifesto railing against a “Hispanic invasion of Texas”.

Several presidential candidates, including Sanders, have paralleled the language in the document to Trump’s frequent use of similar rhetoric. Trump condemned white supremacy in the wake of  shootings in El Paso and Dayton, Ohio and last week accused his critics of making false charges of racism.

CBS’s Margaret Brennan on Sunday also questioned Sanders on the 2017 shooting of her previous guest, House Minority Whip Steve Scalise (R-La.), who mentioned that the gunman had been a volunteer for Sanders’s 2016 campaign. Sanders noted that he had condemned the shooting on the Senate floor that morning.