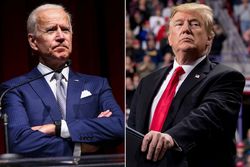 Democratic presidential candidate and former US Vice President Joe Biden has said that President Donald Trump is afraid to take white supremacists, following the mass shootings over the weekend in El Paso, Texas.

"Whether he is or is not a white supremacist, he encourages them. He's afraid to take them on," he continued.

"If you notice the one time he used the word white supremacy ... you talk about sleepy, he was awful sleepy in the way in which he talked about it," Biden said.

In an interview on Tuesday Biden said, "The white supremacists are winning the battle. This is domestic terrorism.”

Then on the same day during an appearance in Iowa, Biden accused Trump of unleashing “the deepest, darkest forces in this nation.”

“We have a problem with this rising tide of white supremacy in America and we have a president who encourages it and emboldens it,” Biden said. “Indeed, we have a president with a toxic tongue who has publicly and unapologetically embraced the political strategy of hate, racism and division.”

He added that Trump “has more in common with George Wallace than he does with George Washington,” characterizing the 2020 election as a “battle for the soul of this nation.”

El Paso police said the 21-year-old suspect published a "manifesto" before his shooting that had anti-immigrant and racist rhetoric. Saturday’s massacre was one of three mass shootings in the United States within a span of a week, unleashing fresh alarm at the national crisis of gun violence.

On Sunday, a 24-year-old gunman killed nine people in a rampage in Dayton, Ohio. That shooting came seven days after a teenager killed three people with an assault rifle at a food festival in California before taking his own life.

'Trump is a racist idiot, but so is Biden'

In an interview with Press TV, American political analyst Daniel Patrick Welch said that white supremacy is not a partisan issue, both Democratic and Republican Parties fund endless racist war.

“You know it is really infuriating when you hear someone like Joe Biden trying to pimp off this mass tragedy for votes. He is a fraud. And he and others like him discovered this notion of white supremacy— is an insult to those of us, you know historians and people from the communities that have been targeted by white supremacy for centuries have been laboring under.”

“The Democrats and the so-called left, the other ruling party is using this as a political football, and it’s a problem of course because Trump is a racist, of course his rhetoric is incendiary and it’s riling up these feelings among his base and it’s a nasty ugly thing. But it’s not necessary in opposing Trump to jump on board with this group of opportunists and charlatans who exemplify absolutely every single aspect of white supremacy, to achieve every single one—except the fact that they themselves are not burning crosses, they themselves are not taking an AR15 and going to a mall and shooting people,” he added.

“But take someone like Joe Biden who co-authored the ‘94 crime bill, the essence of the New Jim Crow, who actually has repeatedly justified and apologized, I mean given apology for mass incarceration. The mass incarceration state is the concept of white supremacy brought to life,” he noted.