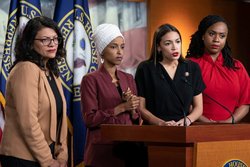 RNA - The White House denied giving any such instruction to Israel and Press Secretary Stephanie Grisham told Axios, "The Israeli government can do what they want. It's fake news".

Sources familiar told Axios that Trump has told American advisers, including senior administration officials that Omar and Tlaib should be barred due to their support for a boycott of Israel.

Israeli in 2017 passed a law that prevents foreigners who support an Israeli boycott from entering the country.

Ron Dermer, the Israel's ambassador to the US, stated last month that the country wouldn't bar the congresswomen.

"Out of respect for the US Congress and the great alliance between Israel and America, we would not deny entry to any member of Congress into Israel," he said, according to Israeli newspaper Haaretz.

The lawmakers are slated to arrive in Israeli on August 18, Israeli officials told Axios, although the timing could change.

The House last month passed a resolution opposing the movement to boycott Israel. Omar and Tlaib voted against the resolution.