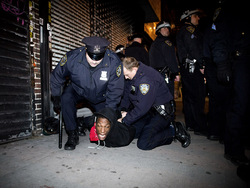 Police violence in the United States is a leading cause of death of young men, especially affecting minorities, with black men 2.5 times more likely to be killed by law enforcement over their lifetime than white men, according to a study.

RNA - Among men of all races, ages 25 to 29, police killings are the sixth-leading cause of death, according to research by Rutgers University in Newark, New Jersey, and published this month in the Proceedings of the National Academy of Sciences, World News reported.

The risk of a black man being killed by a police officer is about 2.5 times higher than that of a white man, the study found. Black women were 1.4 times more likely to be killed by police than white women.

“The inequality is not surprising,” stated lead author Frank Edwards, assistant professor in the School of Criminal Justice at Rutgers University.

Edwards cited the police killings of black men like Michael Brown and Eric Garner, and boys like Tamir Rice, and the protests that followed that brought national attention to the racially-motivated character of police violence against civilians.

“All you have to do is turn on the news to see that people of color are at a much greater risk of police-related harm,” he added, saying, “What we lack in this country are the solid estimates of police related deaths because there is no official database where this information is stored.”

There are roughly 1,000 police killings annually in the US, according to independent tallies, including those by The Washington Post and The Guardian newspapers. Of those, about half are determined to be unjustified

Police killings are far more common in the United States than in other advanced countries, partly because the US has a much higher rate of gun ownership and homicide than economically similar countries, according to a 2016 study.