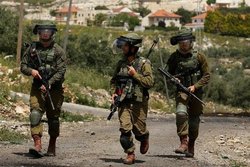 The Israeli occupation forces (IOF) on Friday morning martyred a Palestinian child and wounded a young man as they were trying to enter Jerusalem to pray at the Aqsa Mosque.

According to local sources, Israeli soldiers at Mazmouriya checkpoint in Eastern Bethlehem opened fire at a group of Palestinian citizens during their attempt to reach Jerusalem to perform prayers on the last Friday of Ramadan.

Consequently, a 15-year-old child was seriously wounded in the chest and left to bleed for a while before transferring him to hospital where he was proclaimed dead. Another young man was also critically injured.

Medical sources at al-Hussein Hospital in Bethlehem said that a child called Abdullah Ghaith arrived in the hospital in very critical condition before he was pronounced dead.

They added that 21-year-old Mu’men Abu Tabeesh, from al-Fawwar refugee camp in al-Khalil, was badly injured in his abdominal area, describing his condition as “serious”.

The IOF on Friday morning prevented thousands of Palestinians in the West Bank from entering Jerusalem to perform prayers at the Aqsa Mosque on the last Friday of Ramadan.