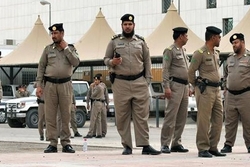 Three imprisoned Saudi scholars who have been sentenced to death and are reportedly due to be executed shortly after the holy month of Ramadan are being tortured for their opposition to normalization of ties with Israel.

RNA - "We have been told that Dr. Ali al-Omari has been transferred to a prison that is notorious for torturing and is run under the supervision of the Royal Court. Before this, Saud al-Qahtani, the special advisor to Mohammed bin Salman, supervised Omari's interrogation and torturing, but a new team is in charge now which is not less brutal than him," wrote Mo'taqeli al-Rai twitter account, which pursues the situation of Saudi inmates imprisoned against human rights, on Tuesday.

It added that Sheikh Salman al-Ouda, Sheikh Awad al-Qarni and Ali al-Omari are in solitary confinement and being tortured.

Also, Saudi researcher and university professor Saeed bin Nassar al-Qamedi said in an interview that the three scholars have been imprisoned for their opposition to the Saudi government's policy of normalization of relations with Israel.

"All groups of people in Saudi Arabia except those called 'the cyber militia' oppose normalization of ties with Israel," he added.

Saudi officials are reportedly set to execute the three scholars after the holy month of Ramadan as a brutal crackdown led by Crown Prince Mohammad bin Salman (MbS) against Muslim preachers and intellectuals widens in the kingdom.

The news outlet Middle East Eye, citing two unnamed Saudi government sources, reported last Tuesday that Ouda is the assistant secretary-general of the International Union of Muslim Scholars, which the Riyadh regime has listed as a terrorist organization.

Saudi authorities detained the prominent cleric in September 2017 and have held him in solitary confinement without charge or trial ever since. The officials have imposed travel bans on members of his family as well.

A family member has told Human Rights Watch that the distinguished cleric was being held over his refusal to comply with an order by Saudi authorities to tweet a specific text to support the Saudi-led blockade of Qatar.

Ouda, instead, posted a tweet, saying, “May God harmonize between their hearts for the good of their people” - an apparent call for reconciliation between the Persian Gulf littoral states.

Ouda has been prevented from communicating with the outside world since October last year.

The trio is currently awaiting trial at the Special Criminal Court in the capital Riyadh. A hearing was set for early May, but was postponed without setting a further date.

“They will not wait to execute these men once the death sentence has been passed,” a source stated on condition of anonymity.

A second source, requesting not to be named, noted that the beheading of 37 Saudi nationals in a single day in April was used as a trial balloon to see how strong the international condemnation was.

“When they found out there was very little international reaction, particularly at the level of governments and heads of state, they decided to proceed with their plan to execute figures who were prominent,” the source added.

According to Fars News Agancy, the mass execution was the largest in Saudi Arabia since January 2016, when 47 men were executed on a single day, including Shiite cleric Sheikh Mohammad Baqer Nimr al-Nimr.

MbS was appointed the first in line to the Saudi throne by his father, King Salman bin Abdulaziz Al Saud, in June 2017. Since then, MbS has been involved in an aggressive push to purge royals and businessmen critical of his policies under the banner of an “anti-corruption campaign”. He has also ordered the rounding up of scores of activists, high-profile clerics and women's rights defenders. His international reputation has been badly tarnished by his role in Journalist Jamal Khashoggi’s murder in Turkey last year.