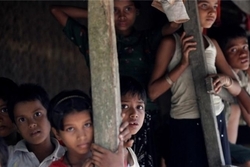 The same units of the Myanmar military that in 2017 were implicated in a brutal crackdown that drove hundreds of thousands of mainly Muslim Rohingya from the country are again committing war crimes as they step up their campaign against ethnic Rakhine rebels, Amnesty International announced.

RNA - The conflict in Western Myanmar's Rakhine state escalated in January after 13 police officers were killed in a co-ordinated attack by the Arakan Army, prompting the civilian government of Aung San Suu Kyi to order the armed forces to "crush" the group, which recruits from the largely-Buddhist ethnic Rakhine community, Al-Jazeera reported.

In a new report on Wednesday, Amnesty said its investigations showed war crimes and human rights violations were being committed by soldiers from the Rakhine-based Western Command, which was also implicated in atrocities against the Rohingya in August 2017.

Victims also identified soldiers from the Myanmar Army's 22nd and 55th Light Infantry Divisions, units that usually operate in other parts of the country.

"Less than two years since the world outrage over the mass atrocities committed against the Rohingya population, the Myanmar military is again committing horrific abuses against ethnic groups in Rakhine state," Nicholas Bequelin, regional director for East and Southeast Asia at Amnesty International, stated in a statement.

More than 730,000 Rohingya, a minority ethnic group denied citizenship by Myanmar, were driven into Bangladesh in the bloody crackdown in 2017. A United Nations fact-finding mission has called for the prosecution of top Myanmar generals for crimes against humanity and genocide over the violence.

The latest unrest, with the military now focusing its attention on the Arakan Army, a group of an estimated 7,000 fighters battling for greater autonomy, has driven more than 30,000 people from their homes, according to Amnesty.

"There is a persistent culture of impunity," Laura Haigh, the Amnesty report's researcher, told Al-Jazeera.

"It's not just a case of a few bad eggs," Haigh said, adding that "this is very much a systemic, institutionalised problem with the Myanmar military that's not going to go away by sanctioning a few soldiers. This is not a country that's committed to accountability in any way, shape or form."

In April, the United Nations announced it was "disturbed" by reports of continuing attacks on civilians in the restive state.

In its report, titled No one can protect us: War crimes and abuses in Myanmar's Rakhine State, Amnesty is urging the UN Security Council to refer the situation in Myanmar to the International Criminal Court and impose an arms embargo. It is also calling for sanctions against senior officials.