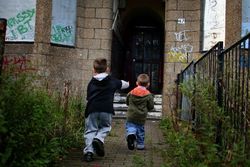 The British government’s cuts to welfare over the past decade have caused a “hunger crisis” by leaving tens of thousands of poor families across the country without enough food to eat, according to a damning report by Human Rights Watch.

RNA - The 115-page report is titled “Nothing Left in the Cupboards: Austerity, Welfare Cuts, and the Right to Food in the UK”, accused the government of a clear breach of its duty to ensure adequate food for all citizens, World News reported.

“The way the UK government has handled its reduction in welfare spending has left parents unable to feed their children in the fifth-largest economy in the world,” Kartik Raj, HRW’s Western Europe researcher said Monday, adding, “The UK government should ensure everyone’s right to food rather than expecting charities to step in and fill the gap.”

The report explains in detail how scores of families with children remain dependent on food aid from charities to get by as a direct result of the austerity-motivated cuts to the welfare system, a problem that has been exacerbated by the introduction of the Universal Credit System and other controversial measures.

Human Rights Watch warned that many of the deprived families were single parent households led by women.

“Often, I have nothing left at the end of the week,” said a 23-year-old mother from Hull with a 4-year-old daughter.

“When you’re a single mum there are very few jobs you can do that let you drop your child to school in the morning, then go to work and be back at 2.30 to pick them up. I skip meals, so my daughter can eat,” added the woman, who had failed to find employment that matched her daughter’s school schedule.

She stated that she received her food through a “low-cost community pantry which redistributes surplus food from supermarkets”, the HRW report noted.

The report focused on Hull, Cambridgeshire and Oxford, three areas in England which have high deprivation levels.

The HRW blamed the surge of hunger in England mainly on disproportionate cuts to welfare compared to other public services.

The report said that public welfare to assist children and families fell by 44 percent between 2010 and 2018, far outstripping cuts in many other areas of government expenditure.

The government made the situation even worse by capping benefits for families and introducing an “arbitrary and discriminatory” two-child limit.

The Tory government has also frozen annual increases to welfare payments over the past four years despite rising food prices and inflation.

Major changes to the welfare system through introducing the Universal Credit system was another main reason behind the trend, the report added.

The HRW also slammed the UK government for failure to address the stark deterioration in the standard of living for the country’s poorest. Some of those signs included “skyrocketing food bank use, and multiple reports from school officials that many more children are arriving at school hungry and unable to concentrate”.

“This rise in hunger has the UK government’s fingerprints all over it,” Raj said, adding, “Standing aside and relying on charities to pick up the pieces of its cruel and harmful policies is unacceptable."

"The UK government needs to take urgent and concerted action to ensure that its poorest residents aren’t forced to go hungry,” Raj conitnued.