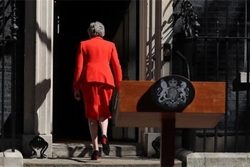 Following the resignation of Prime Minister Theresa May on Friday, nearly two-thirds of Britons believe the UK is in a state of crisis, with most favoring a general election once a new leader is in place, according to a new survey.

RNA - The poll, undertaken by Sky Data and published on Saturday, found that 54% of the public believe an immediate general election should be held once a new prime minister has been chosen, versus 36% opposing one and 11% undecided, Anadolu Agency reported.

Some 65% of the public now believe that the UK is in a national crisis following May’s resignation and amid the growing chaos surrounding Brexit, with 27% disagreeing and 8% unsure.

These figures represent a significant increase from the last time the question was asked.

The same question was asked immediately after the first parliamentary defeat of May’s Brexit deal in January, the largest government defeat in British history, in which 61% said the UK was in a state of crisis. Since then the plan has gone down to defeat two more times.

Following May’s resignation, 73% of the public also say that the UK has become more divided over the last few years.

May announced her resignation on Friday, bowing to pressure from a group of senior Tory MPs after being threatened with a new vote of no confidence.

May's revised Brexit agreement, which included a vote on a second referendum if it were to be passed in parliament, infuriated MPs in her party, was rejected by Labour, and led to the resignation of Andrea Leadsome, a senior Cabinet member and leader of the House of Commons. Other ministers also threatened to resign if May refused to set a timetable for her departure.

May is expected to continue to lead her party and the country until June 7, after the results of the European elections have been released and after she welcomes US President Donald Trump for a state visit. Following this, the Tories will enter a party contest in which a number of Conservative MPs will contend for the leadership position.