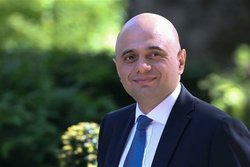 Britain’s interior minister Sajid Javid who is the top Muslim politician in the country has announced his bid to become the next prime minister of the country.

RNA - Javid announced his candidacy for the leadership of the ruling Conservative Party in a post on Twitter on Monday.

He is the first Muslim politician to near the top job in government in the UK, a country home to more than two and a half million Muslims.

Nine lawmakers have announced their bid to become the next leader of a Tory party which is suffering from a falling popularity due to the failure of the government to deliver on the results of the 2016 referendum on leaving the European Union.

Although not a fully observant Muslim, Javid has sought to maintain a close link to the Muslim community in the UK. Anti-Muslim groups and figures have opposed his rise to the cabinet, saying they will do their utmost to prevent the British Pakistani politician from becoming next prime minister.

Some of Javid’s decisions during his more than a year in Home Office (interior ministry) has also proved popular among non-Muslims and extremists, including a decision earlier this year to revoke the citizenship of a girl who had traveled to Syria to join terrorists.

Announcing his bid on Monday, Javid said he had the potential to bridge the divides in the Conservative Party and rebuild trust among the members.

“We must bridge divides to heal communities, reminding us of our shared values as a United Kingdom,” said Javid in a video.

He also vowed to be serious on Brexit, saying results of the Thursday European parliament elections in which the Conservatives scored less than 10 percent of the vote showed that the government “must get on and deliver Brexit to ensure there is renewed trust in our democracy”.