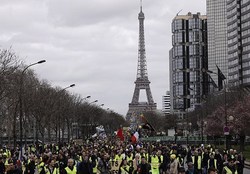 Scuffles between police and protesters broke out in France's Reims as the Yellow Vest movement rallied on its 27th weekend in a row. The six-month anniversary demonstrations were peaceful in Paris and other cities.

RNA - Some 15,500 demonstrators have rallied across France, according to figures from the Interior Ministry. While the organizers claim the figure is just over 40,000 participants, it's still no match to the numbers the movement attracted when it started in November last year, World News reported.

In Reims, multiple scuffles between law enforcement and demonstrators were registered. A heavy presence of the so-called 'black bloc' – far-left protesters, covering their faces and sporting similar black attires to make identification harder – might have contributed to the violence on the city's streets.

Rowdy protesters have set various objects on fire, and some also tried to erect barricades across the streets.

They also vandalized the local office for the France Bleu radio station, as well as other buildings.

Authorities say 1,600 people went out in the streets of Paris, although Occurrence, an independent research firm that has been following Yellow Vest rallies from the very beginning, put the number at 5,600. The Paris march was largely peaceful – and observed by a large police force – yet some minor scuffles were observed.