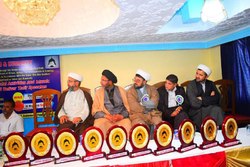 Rasa – A seminar on the subject of “Islam and Humanity” was organized by the Rahmat al-‎Alamin Foundation in Kashmir.‎

Many leading Muslim and non-Muslim scholars and social activists from Jammu and Kashmir ‎spoke about the different aspects of humanity and Islam that include: the relationship ‎between Islam and humanity, the necessity of humanitarian education, interfaith ‎perspectives in the domain of humanism, Islamophobia, human rights violations throughout ‎the world, human rights, the necessity of ‎moral education, the rise in global terrorism and ‎the necessity of unity among humanitarian religions. ‎
‎ ‎
The interfaith seminar was a great achievement for the Rahmat al-Alamin Foundation ‎ ‎Foundation, where such interfaith seminars, conferences and workshops haven’t been ‎witnessed for decades. ‎
‎ ‎
Speaking at the conference, Shaykh Ahmad‎ stated, “A man must be a human first, humanity ‎is come before every religion, community or sect. Currently, the people are busy in securing ‎their self-constructed faith and humanity itself is suffering.”‎
‎ ‎
The non-Muslim scholars and social activists in attendance also stressed the need of the ‎education of mankind. Hindu activist Prana Shangloo said, “Humanity has no religion but is ‎itself a unique religion. One who tries to harm it isn’t following a religion but a beast. None of ‎the religions in the world supports terrorism but rather terrorism is only due to the person’s ‎own inability to understand any religion.”‎

She further described her emotional life story in Kashmir and stressed the peaceful and ‎brotherly relationship between all Kashmiris irrespective of any religion.‎
‎ ‎
The seminar was concluded with a award ceremony in which many leading human rights ‎activists, social activists and Islamic scholars who spread peace and love among the people ‎were awarded by the Rahmat al-Alamin Foundation.‎