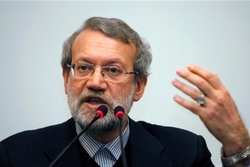 Iranian Parliament Speaker Ali Larijani said on Monday that the administration of the US President Donald Trump is after condescending other countries, reassuring that negotiating with the US is a strategic mistake.

RNA - Larijani dismissed the possibility of talks with the Trump administration, saying that holding negotiations with the current US government is a “strategic mistake”.

Making the remarks today in a local event in Tehran, Larijani noted that US officials should understand that they are standing against a fierce rival.

Larijani described those who favor talks with the current US administration as “simple-minded”, adding, “Negotiating with this individual (President Trump) is meaningless. He has offered 12 preconditions for talks, one of which requires Iran to abandon its nuclear program.”

The discourse that the US administration is following is that of “humiliating others” as all can see in the case of Saudi Arabia. One day they say the Saudi kingdom will collapse if they stop their support and the other day they say “Saudi Arabia has nothing but money”.

Larijani also said that despite Riyadh's increased hostility against Tehran, “We have never closed the gates of negotiations with them.”

Back in February, Senior diplomatic sources in Tehran revealed that US President Donald Trump was seriously attempting to open a channel to hold direct talks with his Iranian counterpart and travel to the country.

"The US is not so much serious in the current sanctions given the waivers granted to certain countries… and it is trying to make a communication bridge to Iran," Amir Moussavi, a former Iranian diplomat, told the Arabic-language al-Mayadeen news channel on February 08.

"Based on information I have, a message was sent from Washington (via mediators) for direct talks with Mr. Rouhani. Even Mr. Trump has voiced readiness to visit Tehran," he added.

Moussavi said that Iran has rejected Trump's demand for a visit to Tehran, adding that one of the mediators is Oman.

"Two European states, two Arab countries and one Southeast Asian state are the mediators," he said, adding that the messages have been sent from Trump and his son-in-law Jared Kushner.

Moussavi said that Iran has an important condition for talks as it does not want talks for talks and talks for just taking pictures.

"Iran's most important condition is that Trump should return to the (2015) nuclear deal from which it has withdrawn. Iran has sent this message to Washington via mediators," he said.

Also, prominent Lebanese analyst and journalist Tawfik Shoman was another guest of al-Mayadeen news channel on Friday who revealed that Iraq is another Arab country playing a mediatory role between Tehran and Washington.

The revelations by the former Iranian diplomat likely refer to Trump's remarks a few months ago when he said that he would be willing to meet President Rouhani without preconditions to discuss how to improve relations.

Iran’s foreign minister said at the time that Washington should blame itself for ending talks with Tehran when it withdrew from the nuclear deal.

“The US can only blame itself for pulling out and leaving the table...Threats, sanctions and PR stunts won’t work,” Mohammad Javad Zarif said in a tweet.

Also, the foreign ministry spokesman said Trump’s offer to negotiate with Tehran contradicted his actions as Washington has imposed sanctions on Iran and put pressure on other countries to avoid business with the Islamic Republic.

“Sanctions and pressures are the exact opposite of dialogue,” Bahram Qassemi said.

According to Fars News Agancy, a senior Iranian analyst had also disclosed in October 2-17 that President Rouhani had rejected a request by Trump for face-to-face talks on the sidelines of the UN General Assembly conference in New York.

"US President Trump has invited President Rouhani to a face-to-face meeting during Mr. Rouhani's visit to New York to participate in the UN annual conference in September (2017) but our president has turned down the offer," Mahdi Faza'eli wrote.

Noting that the demand was raised one day after Trump's insulting speech against Iran at the UN, he said French President Emanuel Macron had also been trying to persuade President Rouhani to accept the meeting, but failed.

Faza'eli underlined that the US statesmen's efforts to hold talks with Iran were nothing new, and said, "The Americans are sure that such negotiations will benefit them but they will have no achievements for Iran but harm."

Hours after Faza'eli's remarks, Qassemi confirmed his revelation, saying that "this willingness (to meet President Rouhani) was expressed by the American side, but was rejected by the Islamic Republic of Iran's president".

Yet, he denied Macron's mediation efforts, saying that the part of the report that referred to the French president was incorrect.