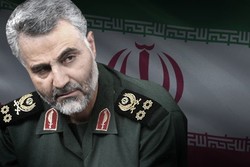 Commander of the Quds Force of the Islamic Revolution Guards Corps (IRGC) Major General Qassem Soleimani dismissed possibility of Tehran's talks with Washington, warning Washington that it will be forced to pay more costs because of its increased threats to Iran.

RNA - "The enemies seek to hit a blow and damage us and our country's security through pressures and economic sanctions, and they use all their capacities to this end. But today, enemy's costs go higher to the very same degree that it poses threats," General Soleimani said, addressing a forum of Law Enforcement Police commanders and officials in Tehran on Monday.

"The enemy wants to make us sit to the negotiating table by economic pressures and such a negotiation is an instance of surrendering, but our people are vigilant and wise and believe that negotiation with the enemy under the present circumstances means complete surrendering and we will definitely not accept this humiliation," he added.

General Soleimani explained that the US and its allies do not have any powerful stream in the West and East Asia and rely on illegitimate governments, saying that Iran is now a powerful country at high levels of maturity in military and security fields.

In relevant remarks on Wednesday, Iranian President Hassan Rouhani downplayed the effects of Washington's decision to end sanctions waivers on Iran's oil sales, and dismissed talks with the US administration which uses the language of threat and force to demand negotiations.

According to Fars News Agancy, President Rouhani said Iran was pleased with all its neighbors, except Saudi Arabia and the UAE, and sent them a tacit warning. "They should note their acts and behavior. Saudi Arabia and the UAE should know that they have survived because of the wise decision made by the Islamic Republic of Iran's government."