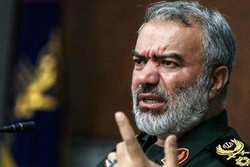 RNA - "The Americans have always been given a crushing response when they have done anything wrong, and they will surely receive a response in future too if they take any (wrong) action. At present, we are much more powerful than before and the Americans know this well too," General Fadavi said, addressing Iranian university students in Tehran on Monday.

Asked about the US allegations about blocking the bank accounts of IRGC commanders in foreign states after blacklisting the IRGC, he said that his colleagues do not have any accounts outside the country.

Elsewhere, General Fadavi referred to Iran's military advisory role in Syria, saying, "Today, we fight against enemy thousands of kilometers away, while we have the initiative."

Chief of Staff of the Iranian Armed Forces Major General Mohammad Hossein Baqeri stressed late in January that his country could change its defensive approach to offensive if its interests are endangered by enemies.

"Of course, we do not have any greedy eyes on other countries' interests and soil but it is possible that we adopt an offensive approach to protect our interests to make foreigners keep thoughts of aggression against our country's interests away even from their minds by witnessing impacts," General Baqeri said, addressing a meeting in Tehran on Jan. 27.

Then, five days later, former Lieutenant Commander of the Islamic Revolution Guards Corps (IRGC) Brigadier General Hossein Salami said that if Western powers sought to limit Iran’s missile power, the country would have no option but to expand its potentials in the strategically important field.

According to Fars News Agancy, Salami, who is now the IRGC top commander, made the remarks on February 3, when he reiterated that Iran’s strategy to maintain a cap on its missile power would change if the European Union and others sought to force the country into disarmament.