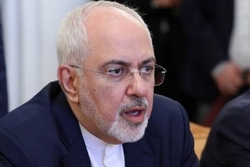 Foreign Minister Mohammad Javad Zarif says hard as it may be, Iran will never succumb to pressures being exerted on it by the United States.

RNA - “We will find a way. We have [done that] for 40 years, and will [do so] now too,” the top diplomat was quoted by IRNA as telling the Doha-based Al-Sharq newspaper on the sidelines of the 16th ministerial meeting of the Asia Cooperation Dialog (ACD) in the Qatari capital.

Acknowledging that the course of action taken by Iran to thwart US pressures is not an easy one, Zarif asserted, “We will never accept pressures against our nation…We will never bow under pressures.”

Iran, however, would welcome all those extending a hand of friendship towards it, the Iranian foreign minister added.

He joined the gathering a day earlier, when he addressed the attendees, warning about the “existential threat” that the US’s unilateralism poses to the entire international community.

The “rising and aggressive unilateralist wave” threatens to affect the entire world, in which case, the rule of jungle would quickly replace the rule of law, Zarif said.

Under President Donald Trump, the US has initiated what it calls a campaign of “maximum pressure” against Iran, pulling out of a multilateral deal with the country and re-imposing sanctions against it.

Zarif, meanwhile, reacted to a US plan to designate the Egyptian movement of Muslim Brotherhood as a “terrorist organization.”

“The US is supporting the biggest terrorist in our region, namely the Zionist regime [of Israel]. Therefore, Washington is in no position to designate others as terrorists either in word or in deed,” he said, adding that Tehran condemns whatever action that Washington may take in this regard.

The US recently took a similar move against the Islamic Revolution Guards Corps (IRGC), Iran’s elite defense force last month, labeling it as terrorist. The Islamic Republic has gravely warned about the implications the move has for regional and international security, and reciprocally blacklisted American forces based in West Asia, known as the United States Central Command (CENTCOM).

“Whatever action that the US has taken so far has been in line with sabotaging the region’s stability. I cannot even recall one instance, where the US might have taken a step towards [contributing] to our region’s stability,” Zarif concluded.
847/940
Tags: Zarif Iran US
Short Link rasanews.ir/201rfo
Share
0