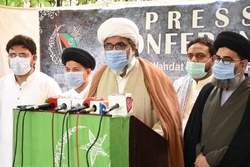 RNA – Pakistan’s Majlis-e-Wahdat-e-Muslimeen will hold programmes in commemoration of ‎‎Allamah Arif Husayn al-Husayni on the 32nd anniversary of his martyrdom.‎

He left behind a legacy of revolutionary Islamic political thoughts which call for struggle for ‎‎attaining legitimate rights of oppressed people.‎

Allamah al-Husayni had worked for strengthening intra-Muslim unity and for that purpose he ‎‎also held meetings with Deobandi scholars.‎

He also organized the Quran and Sunnah Conference. Since he staunchly opposed global ‎‎imperialism and its plots, hence, imperialist henchmen assassinated him.‎