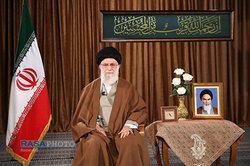 In a decree on May 28, Ayatollah Khamenei appointed former Iranian ‎Parliament speaker Ali Larijani as his adviser ‎

RNA – In a decree on May 28, the Supreme Leader of the Islamic ‎Revolution, Ayatollah Sayyed Ali Khamenei, appointed former Iranian ‎Parliament speaker Ali Larijani as his adviser and also a member of ‎the country’s Expediency Council (EC).‎

In the decree, Ayatollah Khamenei hailed Larijani’s “useful experience” and efforts ‎during his vital responsibility as the speaker of the parliament for three consecutive ‎terms and appointed him as the Leader’s adviser as well as a member of the ‎Expediency Council.
‎
Iranian lawmakers on Thursday elected Mohammad-Baqer Qalibaf, a former mayor of ‎Tehran, as the new speaker of the Parliament.‎

The Expediency Council is an administrative assembly appointed by the Supreme ‎Leader and was created upon the revision to the Constitution of the Islamic Republic of ‎Iran on 6 February 1988.‎

It was originally set up to resolve differences or conflicts between the Iranian Islamic ‎Parliament and Guardians Council (GC).

Members of the council are chosen by the ‎Leader once every five years.‎