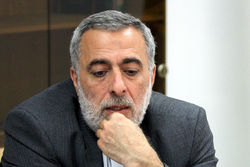 The Cultural Directorate of al-Mustafa International University has issued a statement of condolences on the passing of Hoseyn Sheykholeslam.

RNA – The Cultural Directorate of Qom’s al-Mustafa International University has issued a statement on the passing of Mr. Hoseyn Sheykholeslam.

Mr. Sheykholeslam died of COVID-19 (novel coronavirus) on March 5, 2020, two days after being taken to Tehan’s Masih Daneshvari Hospital after being diagnosed with the virus.

He was Iran’s former ambassador to Syria, a member of the 7th Parliament of Iran, an assistant to the Parliament Speaker Ali Larijani for International Affairs and an advisor to the foreign minister Mohammad-Javad Zarif.

Mr. Sheykholeslam was also one of the students who held American spies hostage during the Iran hostage crisis.

The news of the passing away of the dear brother and the honourable learned and revolutionary diplomat, Mr. Hoseyn Sheykholeslam, the International Vice-President of the World Forum for the Proximity of Islamic Schools of Thought, may the mercy and blessings of God be upon him, has caused sadness and lament. Undoubtedly, the absence of this beloved diplomat, who devoted his life to the Islamic Revolution and the school of light of the Ahl al-Bayt, is a cause of serious damage to the Islamic community and the Islamic Resistance Front. It is hoped that God Almighty, with his grace and mercy, will compensate this tragic loss by resurrecting this pure soul with his martyred comrades.

We offer our condolences to the Supreme Leader of the Islamic Revolution, the noble nation of Islamic Iran, the servants in the Ministry of Foreign Affairs, the World Forum for the Proximity of Islamic Schools of Thought and Islamic Azad University, his political and jihadi friends and companions and his esteemed family and we pray for beautiful patience and great reward for his surviving family members.