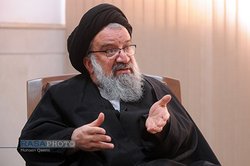 Referring to the coincidence of the beginning of the eleventh Islamic Consultative Assembly ‎and the anniversary of Imam Khomeyni's death, the member of the board of directors of ‎the Assembly of Experts said, “Representatives must follow the life-giving guidelines of the ‎late Imam and his behaviour.”‎

Ayatollah Khatami called the current approach and orientation of the Islamic Consultative ‎Assembly is important and emphasized, “The representatives of the eleventh Islamic ‎Consultative Assembly are expected to constantly pay attention to this point. They must ‎know that they are sitting in their chair and have their position due to the blessings of Islam ‎and must consider themselves indebted to the Islamic system.”‎

He described adhering to wilayah (guardianship) as the most important indicator of an ‎efficient Islamic Consultative Assembly and said, “The expectation of the representatives of ‎the Islamic Consultative Assembly is to know that the more than forty years of the dignity of ‎the Islamic system owes itself to Wilayat al-Faqih (Guardianship of the Jurisprudent) and ‎thus, they must strive to demonstrate this dignity and greatness with their guidance.” ‎

Referring to the coinciding of the beginning of the eleventh Islamic Consultative Assembly and ‎the 31st anniversary of Imam Khomeyni’s death, Ayatollah Khatami said, “He revived a ‎nation and made Islam famous in the world and therefore, they must take the path of the ‎great Imam as their priority and act according to the life-giving guidelines of the late Imam ‎and his conduct.”‎

General Qasem Soleymani was a soldier who supported wilayah

Final Statement of the Society of Seminary Teachers of Qom Meeting:‎