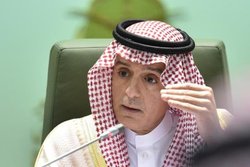 Saudi Minister of State for Foreign Affairs Adel al-Jubeir has hailed US President Donald Trump's so-called deal of the century on the decades-old Israeli-Palestinian conflict as positive, saying the initiative can provide the basis for negotiations between the Palestinians and the Tel Aviv regime.

RNA - “The Palestinians must decide for themselves, and we must support them. I believe that things will become clear after the US elections (slated for November 3, 2020),” Jubeir said at a press conference on the sidelines of his visit to the Romanian capital Bucharest on Thursday.

The top Saudi official went on to say that there are some positive elements in Trump’s proposed deal, which could facilitate negotiations between Israeli and Palestinian officials.

On January 28, Trump unveiled his so-called deal of the century, negotiated with Israel but without the Palestinians.

Palestinian leaders, who severed all ties with Washington in late 2017 after Trump controversially recognized Jerusalem al-Quds as the capital

Palestinian leaders, who severed all ties with Washington in late 2017 after Trump controversially recognized Jerusalem al-Quds as the capital of the Israeli regime, immediately rejected the plan, with President Mahmoud Abbas saying it “belongs to the dustbin of history.”

Palestinian leaders say the deal is a colonial plan to unilaterally control historic Palestine in its entirety and remove Palestinians from their homeland, adding that it heavily favors Israel and would deny them a viable independent state.

“The kingdom appreciates the efforts of President Trump's Administration to develop a comprehensive peace plan between the Palestinian and the Israeli sides,” it said in a statement carried on the state-run SPA state news agency.

The Jewish News Syndicate (JNS) quoted the Arab sources as saying that US Secretary of State Mike Pompeo and his team have been mediating between representatives from Israel and Saudi Arabia over the past few months to set up the meeting.

“In recent days, there have been very intensive discussions between Washington, Israel, Egypt and Saudi Arabia to arrange a summit meeting in Cairo as early as the coming weeks, even before the election in Israel,” one of the Arab sources told JNS. Israel is scheduled to hold a general election on March 2.

Saudi Foreign Minister Prince Faisal bin Farhan, however, asserted on Thursday that there are no plans for a meeting between Mohammed bin Salman and Netanyahu.

The CEO of the AJC, David Harris, described Issa’s visit to the site as highly significant, claiming that the trip represented “the most senior delegation" of Muslim scholars to visit Auschwitz ever.

Back on July 22, 2019, angry Palestinians jeered and cursed a Saudi blogger known to be a huge fan of establishing formal ties between Israel and Saudi Arabia.

One video clip posted on Twitter at the time showed Mohammed Saud being cursed and jeered as he was visiting the al-Aqsa Mosque compound in the Old City of Jerusalem al-Quds.

He was part of a six-person media delegation from the Arab world, including representatives from Jordan, who were in the occupied Palestinian territories at the invitation of the Israeli foreign ministry.

Palestinians protesting his visit called him a “traitor,” “animal” and “Zionist trash,” and also told him to “go to a synagogue” instead of praying at a mosque.

Another video clip showed plastic chairs and sticks being thrown at him as he walked in the market in the Old City.

Akhbar noted that Abbas had turned down the offer, saying supporting the deal would be “the end of his political life.”

Earlier last year, delegates from Saudi Arabia, the United Arab Emirates and Egypt at a meeting of Arab states reportedly opposed bids condemning the normalization of relations with the Israeli regime.

Russia's RT Arabic television news network reported in March 2019 that Abdullah ibn Muhammad Al ash-Sheikh, the speaker of Saudi Arabia's Consultative Assembly, together with his Emirati and Egyptian counterparts had opposed a paragraph in the final communiqué of the 29th Conference of the Arab Inter-Parliamentary Union in the Jordanian capital city of Amman, which demanded an end to efforts aimed at normalizing ties with Israel and condemned all forms of rapprochement with the occupying regime.

Representative of Mahalat and Delijan in the Parliament: