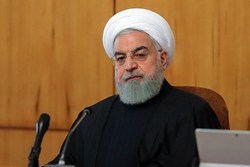 "Enough of these foolish attempts," President Rouhani wrote on his Twitter page on Wednesday.

"The Most Despicable Plan of the Century," he added.

His comments came after the White House claimed that this "Vision" is the most serious, realistic, and detailed plan ever presented, one that could make Israelis, Palestinians, and the region safer and more prosperous.

"This Vision is just the first step and provides the basis for historic progress toward peace. The United States hopes this Vision will lead to direct negotiations between Israel and the Palestinians," it added.

Trump announced his so-called 'Deal of the Century' peace plan together with Israeli Prime Minister Benjamin Netanyahu in the White House on Tuesday, giving Israel full control of the settlements and Jerusalem as its undivided capital. The plan was deplored and rejected across the world, including the UN and the Muslim world.