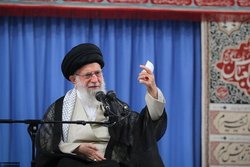 Supreme Leader of the Islamic Revolution Ayatollah Seyed Ali Khamenei underlined that the Palestinians and Muslims across the world will not allow Washington to implement its so-called 'Deal of the Century' plot.

RNA - "To the dismay of US politicians, the satanic, evil US policy about Palestine —the so-called Deal of the Century— will never bear fruit, by the grace of God," Ayatollah Khamenei's official Twitter account quoted him as saying.

"About the Judaization of al-Quds and saying it should be in the hands of the Jews, they’re talking foolishly and unwisely," he added.

"The issue of Palestine will never be forgotten," Supreme Leader noted.

"The Palestinian nation and all Muslim nations will definitely stand up to them and not allow the so-called Deal of Century to be realized," he underlined.

US President Donald Trump announced his so-called 'Deal of the Century' peace plan together with Israeli Prime Minister Benjamin Netanyahu in the White House on Tuesday, giving Israel full control of the settlements and Jerusalem as its undivided capital. The plan was deplored and rejected across the world, including the UN and the Muslim world.