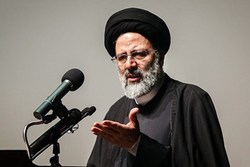 RNA - Rayeesi in a statement on Wednesday described 'Deal of the Century' as against the international laws and a trick to consolidate oppression and aggression, saying that the deal will not bring peace and security to the Zionists but instead it will institutionalize insecurity in the occupied lands more than before.

The statement further noted that the terrorist president of the US will not be able to silence cries of justice for the Palestinian people and other freedom fighters in the world that has emerged in the form of resistance movement today.

History has proven that fighting with justice will sharpen the sword of justice, Rayeesi said, noting that Americans should be more afraid of the wrath of the Palestinian people and other nations in the region than ever before, he said.

He also warned the Americans that by planting the tree of tyranny, one cannot reap fruit of justice and calm, saying that security and stability are fruits of sapling of justice, and it will not be fulfilled except through ensuring all rights of the Palestinian people and end of occupation of the Zionists.

Deal of the century runs counter to the international law. Therefore, it is not acceptable among regional people and lacks any legal legitimacy, Rayeesi said.

The US ridiculed human rights once again with this stratagem, he said, noting that the deal should be introduced as the indictment of the world's free nations against the American regime as the rudest human rights abuser in the world.

Islamic Republic of Iran believes that it is only resistance that can ensure the Palestinian people's rights and protect the regional security and guarantee regional peace, the official said.

Trump announced his so-called “Deal of the Century” peace plan together with Israeli Prime Minister Benjamin Netanyahu in the White House on Tuesday, giving Israel full control of the settlements and Jerusalem as its undivided capital. The plan was deplored and rejected across the world, including the UN and the Muslim world.